When I wrote up my recipe for combination dolma earlier this month, I briefly thought about trying to simplify it, but I decided against it, because dolma is so essentially labor-intensive. But as much as I love the process, and as much as quick dolma goes against my sensibilities, I also love eating dolma, and sometimes I don’t have time to make it, so I finally came up with a way to make it on a weeknight.

If you’ve never made a big pot, let me give you a sense of what you’re missing: First you chop a million different ingredients for the stuffing (separately!). Then you prepare the wrappers—all those grape leaves, cabbage leaves, and onion layers need to be blanched, separated, and trimmed, and all those veggies need to be completely hollowed out with a zucchini corer. Once you’re done with the wrappers and the stuffing, you’ll probably feel like there should be something edible to snack on by now, but alas! There’s not. There are just piles of raw meat, uncooked rice, and par-cooked veggies. But nevertheless, you continue on to the most time-consuming part: the wrapping and stuffing. You spend forever folding, rolling, and building the pot. And then it cooks and rests for an hour and a half.

I might sound kind of whiney, but I actually love this process. It’s therapeutic to make a big pot of dolma on your own when you have an afternoon to yourself to catch up on your podcasts, and it’s so much fun to make dolma with a big group of family. While too many cooks spoil the broth, many hands make light dolma. Little kids can help out by separating the leaves, and older kids can even help roll. But for days when you don’t have time, but still want dolma, I’ve got you covered. Here’s what makes this recipe easier:

1) Instead of mincing by hand, you use a food processor. Plus, I came up with the right order to chop ingredients in the food processor, so that you don’t need to wash it between uses. You just add, blitz, empty, repeat. The above series illustrates the process, and the stuffing comes together so quickly, you’ll feel like you’re in a real-life Tasty video.

2) I’ve chosen the easiest veggie my family makes dolma with: peppers, like cubanelles and poblanos. They’re big and already hollow, and they take almost no time to core and stuff. We don’t normally make an entire pot with these peppers, but they’re in every batch of combination dolma, and the peppers are always a nice break from stuffing the grape and cabbage leaves. Here, they make up the entire pot, so the whole thing is easy, and it turns out delicious.

3) I went with a vegan stuffing. My family’s meat-stuffed dolma has beef that’s been minced by hand, rather than commercially ground. Mincing by hand is very time consuming, so my family’s vegan dolma is way easier. The vegan stuffing in this recipe is the one we make for fasting holidays like Lent and the commemoration of Jonah’s prophecy. You could of course use ground beef instead of the mushrooms and walnuts—it’s just a personal preference, and everyone tends to like dolma the way they grew up with it.

4) You briefly cook the mushrooms for about 5 minutes, and then don’t wash the pot because you’ll be cooking the dolma in it in a few. Easy cleanup, and more flavor!

5) Because it’s a smaller batch, it can cook for a little less than a giant pot of combination dolma. This one only needs 30 minutes of cooking and 15 minutes of resting. Make sure it’s at a gentle boil (above a simmer, below a rapid boil), don’t skip the plate weight, and don’t peek too often, and it’ll cook in no time.

A note on the kind of pepper: poblanos vary a lot in spiciness, but you can control this a bit by using a zucchini corer or paring knife to remove the pith from the inside. But that kind of defeats the purpose of making this easy, so if you want a milder pepper, I’d suggest going with cubanelles instead, which are not very spicy (even if you don’t remove every bit of pith). If you use poblanos, get ready for a couple unbelievably spicy ones (I like that sort of thing, but you might not, so buyer be ware!). I don’t really recommend using bell peppers here, because they are harder to nest together in a small batch like this. I’ve also tried making this with mini sweet peppers, but they take way too long to core and stuff. Give yourself a break and go for poblanos or cubanelles! 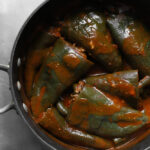 for the stuffing and cooking liquid:

* All the herbs need to be washed and dried well, and their stems need to be removed. But don’t spend too much time on it for this recipe. Just rip the top of the bunch off with one twist, and sort through them to remove any big stems, then wash and dry them. They don’t need to be perfect, since the stems will totally soften as they cook. But please don’t tell my grandmother (if you’re reading this, sorry Nana! <3)”

** A reader notes below that this is really delicious with more coarsely chopped walnuts, which I love the sound of! Dolma is a very soft food in general, especially vegan dolma, and it’s nice to introduce something a little crunchier.

*** Find the biggest peppers you can, and look for ones that aren’t crooked. This will make stuffing quick. Poblanos are pictured here, but cubanelles work great too, and are much less spicy. If you plan to carefully remove the pith from the poblanos to make sure they’re not too spicy, just go with the cubanelles, which you won’t have to be as careful with.

† Many vegetable juices already have a lot of sodium (e.g., V8). If yours is low sodium, you should season it with some salt. I don’t add salt to the vegetable juice if it’s already seasoned.