Okra is often called “slimy,” but its final texture has a lot to do with the way you cook it. So whether you want to maximize or minimize the amount of slime, the recipe in this post will give you total control over the slime-factor. If you’re already on board, jump to the recipe to learn how to cook okra simply with or without a ton of slime.

how to cook okra and control the slime

If you google around, you’ll find tons of tips and tricks for reducing the slime. I love a listicle as much as the next person, but the fact is there’s just one thing I’ve tried that’s really worked, and that’s slicing lengthwise, and then choosing whether to roast cut-side-up or cut-side-down.

Slice lengthwise, decide how much slime you want, and flip them in the corresponding direction. It’s as easy as that!

Now you know just about all you need to perfectly roast okra, but to justify including an actual recipe, I’ve thrown in a few more veggies and spices, as well as specific instructions for anyone new to roasting. Feel free to make the recipe as it’s written (serve it to friends to try to win them over to this beautiful vegetable), switch up the other veggies for some of your favorites, or just leave out everything but the roasted okra, which is all that really matters anyway.

Curried eggplant and okra from the Kitchenista Angela Davis
Vegetables in sao masalo, and maple-glazed roast wild okra from Ankiet Gulabani of Belly Over Mind
My grandmother’s bamiyeh / okra stew

how to cook okra simply 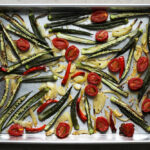