Labneh is a delicious Middle Eastern soft, fresh cheese that can be eaten for breakfast, a snack, or as part of a meze spread. It has a smooth consistency and a slightly sour, subtly sweet flavor. In Lebanon and Syria, my grandmother’s family would make their own labneh at home with mesta, (that is, homemade yogurt).

In Beirut, they would buy milk in bottles at the market, but when they moved back to Syria, they bought a cow and used her milk. My grandmother’s mother, Yemmah Sourma, and her older sister, Masy, would milk the cow, then Yemmah Sourma would make mesta, put the fermented mesta in a cloth, tie the cloth together, and let all of the whey drain away until it reached the perfect consistency. They would save the whey to make booshala, a yogurt and swiss chard soup.

how to make the absolute best labneh ever

These days, we most often buy labneh at Middle Eastern markets, since there are lots of perfectly good brands available. Look for one with fewer additives—the best labneh is just dairy (some combination of milk, cream, whey) and salt (sometimes with a little pectin).

While making labneh at home is a really fun project, I’ve never really found it totally worthwhile to make labneh from store-bought yogurt, since commercial labneh is already so tasty and convenient.

But all that recently changed when my friend, Mary, told me how phenomenal it is when it’s made from homemade yogurt. And it’s true—when it comes to labneh made from homemade yogurt, it’s hard to find anything better. So now I’ve become the kind of person who either buys ready-made labneh or goes all-in and makes it all the way from the beginning of the process, with whole milk, which I turn into yogurt overnight and then strain the next night until it is so perfect, you can’t help but eat the whole thing with a spoon straight from the refrigerator (no olive oil, spices, or pita bread required).

how to make very good labneh from store-bought yogurt

I used to think Greek yogurt was best, since it’s already halfway there. But there’s something about the way it’s been processed that just doesn’t work out quite right (maybe since it’s strained by big mechanical centrifuges). After having my friends do a blind-tasting of a few different homemade labnehs, everyone determined that the one made from Greek yogurt was the least favorite of the group.

I’ve found that starting with plain-old unstrained yogurt works better than starting with Greek yogurt. The most important thing is to find one that’s been made from whole milk. I’ve made labneh with fat-free yogurt, but it’s definitely not the same (gritty, sour, and pasty) and I wouldn’t recommend it unless you’re already accustomed to the tastes and textures unique to a totally fat-free diet.

how to use labneh

Labneh is lovely spread thinly on a plate and drizzled with extra virgin olive oil. You can top it with whatever herbs and spices you’d like—mint (especially dried), za’atar, sumac, or paprika each works great. Check out the archives for a full list of my recipes featuring labneh, or check out a few of my favorites, listed below: 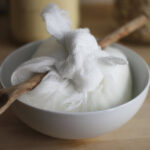