Booshala is the heart of Assyrian food. This fact is embedded in the name itself: “booshala,” literally translated in some dialects of Assyrian, means “cooked.” To me, it was always just the name of this yogurt and swiss chard soup, but I learned about this complex etymology when I met up with Chaldean blogger, Candice, from the blog Boushala.

At the time, I had just developed this recipe, based on the booshala of my grandfather’s mother as well as the booshala of my grandmother, and I was curious what Candice’s recipe for booshala looked like, so before we met, I checked out her recipes page, which had several really delicious stews and soups, but I didn’t see a recipe for booshala. When we met, we had such a wonderful conversation about food, family, photography, and graphic design, that before we had to go our separate ways, I almost forgot to ask her this question.

So I (probably a little rudely and abruptly) asked Candice why she had a blog called “Boushala” without a recipe for the dish, thinking maybe her boushala was a well-kept family secret. She gave me a puzzled look and asked what I meant, and we eventually fumbled toward realizing that this word meant something completely different to each of us. In Candice’s language, “boushala” means cooked food, but in my family’s dialect, “booshala” means a very specific kind of food.

In other words, according to my own folk etymology that I’ve dreamed up, at some point in our history, if you vaguely asked for food, this soup is what you’d get. It is Assyrian cooking in its most essential form.

Like gurdthu, booshala takes the two main staples of our cuisine, yogurt and rice, and cooks them together into something delicious. But this dish can be a little bit of an acquired taste for people who aren’t used to cooking with yogurt. I think there are two major stumbling blocks: the temperature and the flavor pairings. Allow me to assuage your anxiety, if you’re having trouble wrapping your head around what this might taste like.

You might not be used to the idea of eating yogurt in something warm instead of something chilled. But eating a yogurt soup isn’t too far a jump from eating chili with a big dollop of sour cream mixed in, or eating a baked spinach dip with loads of cream cheese, parmesan, and sour cream. I think another part of the anxiety over the temperature is a technical one, that the yogurt will curdle if you heat it. But when you add an egg, bring it to a simmer while stirring constantly, and then cook it over low heat, you have nothing to worry about. It will stay creamy and velvety. And moreover, booshala can be served either warm or chilled, so feel free to start by chilling it if you’re nervous about eating a warm yogurt soup.

But I guess cold yogurt soup still might not entirely sell you on the concept, because I think the more fundamental hangup is the idea of eating yogurt with savory flavors. In Middle Eastern food, this is a common and very delicious pairing. Yogurt is often dolloped on prakhe and enjoyed with za’atar or herbs. And indeed, there’s no reason that yogurt should be limited to sweet flavors, since it’s such a neutral ingredient. Consider the analogous flavor pairings of french onion dip, bagels with lox and cream cheese, and crème fraîche and salmon roe crêpes. All of these dairy products are fermented in the same way as yogurt, starting with just about the same ingredients (with varying degrees of dairy fat), and they’re all delicious with savory ingredients.

But as any parent knows, it’s impossible to give reasons and arguments to convince someone that they should try to enjoy a certain food. At the end of the day, learning to love a new thing just takes some combination of open-mindedness and exposure. And booshala hardly needs defending, since we love it enough for everyone.

The yogurt we use for booshala is traditionally made from scratch, although I’ve tested this recipe with both homemade and store-bought and each works just fine. Just make sure you find a yogurt whose flavor you like. Not to name names, but there are a couple yogurt brands out there that have a very particular flavor, which may work nicely with berries and sweetener, but doesn’t really work well in savory dishes. Look for any plain, unstrained, unflavored yogurt that you’d actually want to eat plain. I find that both Indian and Middle Eastern brands generally work really well here.

You can substitute another green in place of the swiss chard. Just avoid very bitter greens like dandelion, and if you use a more delicate green like spinach, reduce the cooking time and add a little more of the greens. You can also substitute barley in place of the rice, which is equally traditional. If you use barley, you’ll need to par-cook it ahead of time, since it takes much longer to cook than rice. Just simmer it in some water until it is still a little crunchy and unpleasantly chewy, and then add it to the soup to cook the rest of the way. 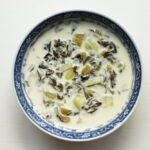 * If you’re making your own yogurt: make a half recipe of plain, unstrained yogurt (you will use 1/2 gallon of milk and 1/2 cup plain yogurt). Follow the instructions as written in my homemade yogurt recipe, but leave the yogurt to ferment for somewhere between 12 to 16 hours, depending on how sour you want the soup to be. Sometimes I like to make a full gallon of yogurt, and then divide it in half. I use one half to make labneh and the other for booshala. I’ve heard that in Syria, my family would add some of the whey from the labneh back into the booshala in place of the water. I’ve never tried it myself, but it might be worth experimenting with, especially if you’re looking for ways to reduce food and water waste.

** I like to serve a big chilled stockpot of booshala, and then I microwave individual bowls for people who want theirs hot (and in case you’re wondering, I prefer eating hot booshala).