These next three posts are dedicated entirely to Thanksgiving, but this one in particular, this cornbread with labneh and slow roasted tomatoes, is the thing I’m most looking forward to this Thanksgiving. And sure, a dish primarily made up of fresh tomatoes isn’t necessarily the most seasonal choice for November, but slow-roasted tomatoes have a deeply wintery flavor, because slow roasting is a way of preserving summer produce.

Some ingredients (certainly tomatoes!) are very strongly tied to their season of harvest, but even the most seasonally-entrenched ingredients can completely transform to suit the palate of another time of year. I’ve been meaning to do more posts about traditional Middle Eastern preservation techniques, and this one isn’t exactly traditional (as far as I know), but it takes advantage of the same concept: a tomato in August won’t taste the same as a tomato in December, but when treated in a certain way, this can be a wonderful thing.

If you’re discovering this post sometime in the summer, you should definitely stock up for the fall and winter: just slow roast them, place them in a single layer on a parchment-lined baking sheet, freeze them solid, and then place them in a ziplock bag. They’ll stay delicious and keep their flavor and shape the whole winter long, especially if you roast them until they’re no longer oozing tomato juice, and then store them properly in the freezer (see the recipe for more specific instructions). My friends Erin and Alvin, who taught me how to slow roasted tomatoes, always have a freezer packed to the brim with their home grown tomatoes, all winter long.

But if you’re more of a grasshopper than an ant in your wintertime preparation, and you’re caught in November with no preserved tomatoes stowed away (or maybe this is the first time you’ve been inspired to make them!), slow roasting can also be a really nice way of coaxing delicious flavors out of sad, out-of-season tomatoes, and you’re going to be very happy with the alchemical results. There’s always next year to aspire to a perfectly stocked, sustainable winter freezer and pantry (I’m still working on it).

I can hardly believe that I need to convince you how delicious this is, so I’ll just tell you a little bit about how I came up with it, which was through the same dumb luck I occasionally stumble upon when I visit a salad or fro yo bar offering unlimited toppings. I succumb to the same stupid method every single time: throw out everything I’ve learned from hundreds of skimmings of the Flavor Bible, and just get all my favorites, all together, no matter whether they actually go together. That means that sometimes you might end up with a caper, watermelon, and alfalfa sprout salad, but sometimes you’ll find that your three favorite things are your favorites for a reason: they mesh like old friends from another life, brought together by your totally capricious decision to place them there. 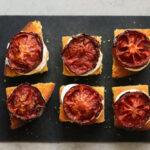 To serve:
1 1/2 cups labneh (you can substitute goat cheese or plain full-fat Greek yogurt here, which both work really well)