Last week, I had the pleasure of baking for chef Mina Park‘s Cook for Syria dinner, organized by Dervla Louli, and hosted by House of Madison. My mom was born in Baghdad, where her father’s family is from, but her mother’s family is from north eastern Syria, and my grandmother spent the later part of her childhood on their family’s farm near al-Hasakah, so it warmed my heart to be able to help raise money for this cause.

But why participate in Cook for Syria in particular? There are many ways to aid victims of the war, but I personally love Cook for Syria because it simultaneously raises money for children affected by the Syrian civil war, while also asking participants to experience a piece of Syrian culture. Perhaps eating a Syrian meal will make everyone more likely to contemplate the humanity of those who need their help, instead of resigning to apathy.

It was so wonderful of Mina to cook my recipe for baked tomato kufteh with zucchini, and so I thought I’d also share it with you here. If you love to cook and want to support the children of Syria, you should consider hosting your own Cook for Syria supper club for your friends and family—and please, please, don’t psych yourself out of it! It could be a huge, elaborate event if that’s your thing, but it could also be a small four-person night in. They have lots of great recipes on their website, or feel free to use one of mine from the recipe archives.

Not all of my recipes are Syrian, per se, since Assyrian and Syrian aren’t the same thing. But there’s some overlap, since many Assyrians live in or immigrated from Syria, plus there is a lot of overlap between our cuisines to begin with. But if you’re unsure, I’ve included a roundup below, featuring recipes that have some connection to my family’s time in Syria, as well as some of my favorites from around the web.

Cook for Syria resources and recipes 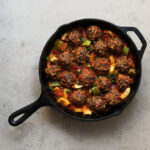