(jump to the manakish za’atar recipe)

If you know me through my blog, you might not know that I’m also a full-time PhD student and teacher. Though I teach and write about fourteenth century English poetry, I don’t like to get too academic when I write about food on my blog. But this week, I had a few quick thoughts on language that I wanted to share.

When you’re running an English language Middle Eastern food blog, transliterating words (or translating them from one alphabet into another) into English is a challenge. There’s technically no single right way to transliterate words from Arabic or Assyrian, which is frustrating since one of my goals is to make my website searchable and standardized.

So when I was working on the post on lahm bi ajeen (Middle Eastern meat flatbread), I was trying to figure out how to spell the name, so I asked my mom. She immigrated to the United States when she was a kid, so while she used to speak Arabic when she was little, she mostly grew up speaking English and Assyrian, a vernacular Aramaic language, and no longer speaks Arabic.

She suggested spelling it “lakhma bi ajeen,” because we assumed that the word lakhma must mean bread in Arabic, as it does in Assyrian. But when I did a quick search, I learned that, while lakhma means bread in Assyrian, lahm actually means meat in Arabic. So lakhma bi ajeen is like one of those funny portmanteaus that doesn’t translate well from one language to another; in Assyrian, it essentially means “bread of the dough” instead of “meat of the dough.”

But it turns out we weren’t so far off base after all, since the two words are etymologically related. According to Stephan Guth, the word was originally used to generally refer to whatever food was the main substance of the meal, but the meaning of the word changed over time through semantic narrowing.

Narrowing is a linguistic phenomenon where words take on more specific meanings as time goes on. So in this case, the original word came to refer to two totally different foods in each language (meat in Arabic and bread in Assyrian). And so now whenever we Assyrians eat meat pies, we call them bread of the dough. Language is such a funny thing.

But since it’s lahm-less flatbread, lakhm’it za’atar in Assyrian, or manakish za’atar in Arabic (also known as manaeesh), doesn’t get into quite as much linguistic trouble as lahm bi ajeen. This flatbread is a really lovely meatless alternative, and it’s especially good if you make your own za’atar, which is a lot easier than it sounds. Adding cheese is totally optional, but it makes this more of a main-course, instead of a mezze or a snack. There are a lot of wonderful variations—my cousin, Sourma, recently posted some beautiful photos of a trip she took to Furn Saj Bakery in LA. Feel free to check out their menu for some man’oushpiration. If you’re looking for a menu featuring this recipe, check out my Cook for Syria supper club menu. 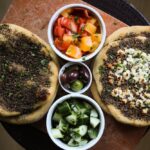 * If you’re making your own dough, simply make this recipe for pizza dough. Divide it into 6 pieces, and you’ll have 2 left over after using 4 for this recipe. Feel free to turn them into pita bread, or freeze them to make pizza another time.