I tend to write about the food my family makes, traditional dishes that I’ve fallen in love with through friends and extended family, and new ideas I’ve come up with, inspired by Assyrian cuisine. But there is a whole list of traditional foods that I’m not used to eating homemade, which I grew up eating from restaurants. One person’s restaurant food is another person’s home cooking, but for my family, baba ganoush (also known as baba ghanouj) is something that we order along with falafel when we get Middle Eastern takeout, and not something we actually know how to make.

But cooking something at home that you’ve only eaten in a restaurant is kind of intimidating, and so I usually take on these sorts of dishes with a slightly different method than usual: researching and experimenting to figure out the best way to make them. Baba ganoush seems really simple (it’s just mushy eggplant, right?), but I’ve discovered that there are hundreds of ways to make it, and even more ways to mess it up.

I first looked to Sami Tamimi and Yotam Ottolenghi’s Jerusalem. It became immediately clear that there is no consensus on the tahini front. The dispute isn’t about how much tahini you should add, but whether you should add any in the first place. According to Tamimi and Ottolenghi, some chefs claim that it’s not baba ganoush without tahini, and some claim that once you add tahini, you’ve made an eggplant salad instead. Furthermore, some people prefer to purée their baba ganoush, while some keep it very chunky.

Ultimately, I settled on adding a small amount of tahini, because that’s the kind of baba ganoush I grew up with. Tahini gives baba ganoush a creamy, emulsified texture that would be missed. I also decided to leave my baba ganoush on the chunkier side, first emulsifying everything but the eggplant, and then simply pulsing everything together a couple times in a food processor.

While we could spend all day arguing over every single ingredient in this recipe, and whether it has a place in baba ganoush (all except eggplant, of course), moisture is the main technical concern. If you leave too much eggplant juice behind, the final spread will have a watered-down flavor and a soupy consistency. Roasting them on the stove isn’t enough to get rid of the moisture because when you first roast them on the stove, the eggplants basically turn into water balloons. Once you start peeling them, they start leaking all over the place. And once you cut them open, they leak even more. But even after all this organic seeping, there’s still a lot of moisture left in the eggplants.

So I followed Ottolenghi’s lead in Plenty, where he suggests straining the eggplant before puréeing. J Kenji López-Alt, in his really thorough and useful baba ganoush article in Serious Eats, has the clever idea of using a salad spinner to speed up the draining step, since it takes about an hour to completely strain. López-Alt also dispels the strategy of pricking holes in the eggplants while they roast, which just makes a big mess and doesn’t actually work. After reading this, I left my eggplants un-perforated, but I decided to do something besides using a salad spinner, though along the same lines: in addition to roasting the eggplants whole and straining them for a few minutes, I also split and broiled them.

Broiling the eggplant after roasting and straining does two things: it gets rid of any excess moisture, and it adds even more roasted flavor. It takes much less time than waiting for the eggplant to fully strain, and it adds so much delicious flavor in the meantime. The already browned exteriors are placed face-down on the sheet pan, so that the watery insides are exposed to the broiler. The cut-sides become just as roasted as the outsides, and they dehydrate in the process.

To preserve even more roasted flavor, like Ottolenghi and Tamimi, I opted for peeling instead of scooping the whole roasted eggplants. It seems like the kind of thing that would take forever, but I timed myself, and it took me 6 minutes. By peeling away the burnt skins, you leave behind the beautifully browned eggplant skin. Look at the photo above and just try to tell me that it wouldn’t break your heart to scoop the eggplants out and miss some of that browned stuff, because it’s breaking my heart just thinking about it. 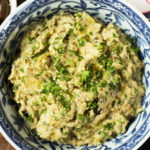 To double roast the eggplant:

To make the dip:

* This is about 7 small Italian eggplants, but you can substitute an equal weight of big eggplants. If you do this, it’ll take much longer to roast them and the final dish will not have quite as much roasted flavor, but it will still be very good. Visit J. Kenji López-Alt’s recipe for medium-large eggplant roasting instructions.

** If you don’t have a gas stove, you can use a grill or broiler. Use the highest heat possible and (if you’re broiling), use the shelf closest to the broiler—you really want the skins to burn. You need either a gas stove or a very hot broiler/grill to make this recipe, because the eggplants will turn to mush before they are peel-able if the direct heat is not hot enough.

*** Depending on your broiler, this could take anywhere from 3 to 15 minutes. Keep a close eye on it.