Last week, I made lawasha (also known as lawash or lavash) with my great aunt, Almasy, or Masy (pronounced MAH-see) for short. In Assyrian, as well as many other languages, Almas means diamond, and her name is kismet, because Masy is one of the most beautiful people I know, but also one of the toughest. She’s in her seventies and can probably beat you in a planking contest. But if you’re not convinced—and she definitely doesn’t care whether you’re convinced—let me tell you that she can definitely beat you in a lawash contest. What would a lawash contest consist of? I’m not entirely sure, but I’d venture to guess it would include a lot of sensational dough twirling, impeccable ingredient divining, and plucking sheets of crispy bread from hot ovens with your bare hands.

Masy has been practicing this skill for so long, she makes all this look completely effortless. She is the oldest daughter in her family, so when she was a teenager growing up in rural Syria, she and her mother would hire a woman to help them make a huge batch of lawasha, which would last their family for months. Lawasha is a traditional means of preserving bread, since the very flat loaves are baked into thin, crispy crackers, and then (optionally) rehydrated later when you’re ready to eat them.

Masy’s family would load a big tannoura (or tannour, similar to an Indian tandoor) full of coals, and they would stick the thin discs of dough to the inside walls to cook them to a crisp. Masy said that she remembers the smell of her arm hair burning off whenever she would reach into the tannoura. Since neither of us has a tannoura, we just used a hot oven. Masy has come up with a brilliant method for making lawasha in an oven, and—no—it doesn’t involve a pizza stone. More on that later.

Just as Masy adapted her recipe to work with a standard indoor gas or electric oven, whenever I record someone else’s cooking, I always struggle with how much I can change it to fit the genre of the recorded, standardized recipe. While it sometimes feels really cold and scientific, this genre is important because it’s an effective way of translating one person’s food (a tangible, sensory, experiential thing) into words, and then actions, and then into someone else’s experience. But everyone has their own quirky way of doing things, and sometimes these small flourishes don’t make it into the final recipe, but they are too beautiful not to note.

There are some things about Masy’s lawasha technique that didn’t make it into this recipe, but which I’ll share in this more narrative form. When she makes the dough, she wets her hands during the kneading to add a little more water when it’s looking a little dry. In this recipe, I don’t specify the particular way to add water to the dough, since pouring a little at a time will work just fine, but I love this more interactive way of determining how much water to add.

And while you don’t need to be able to throw lawasha to stretch it out (a rolling pin will work just fine), this technique makes Masy’s lawasha really special. She claims that you just need confidence to be able to pull this off, but she’s just being modest, because you really need a combination of confidence and skill. You can see the impeccable technique that Masy has developed since she first started baking lawasha in the photos and video below. Feel free to try this at home if you’re interested; it takes a little practice to get the hang of it, but once you do, it makes everything go much quicker. Although, your whole kitchen will be covered in a thin film of flour afterwards (my lens was covered in dust by the end of this photoshoot), but that’s part of the fun and spectacle. Now for some gratuitous photos and a video of dough flinging:

Once the dough is stretched out and ready for baking, you then further stretch it out over the back of a lightly greased sheet pan. Masy’s idea to use the back of a sheet pan is ingenious because it keeps the dough taut, and so keeps it from forming those really big bubbles.

While it seems like trying to replicate the intense heat of the tannoura would be the best course of action for making lawaha, it’s actually a little more complicated than that. I’ve tried this recipe without using the back of a sheet pan, just placing the rolled out dough directly on a pizza stone in the really hot oven, and it just ends up turning into a giant, crunchy pocketed pita. I’m not totally sure of the reason for this, but I have a theory: the bread is so thin and cooks so quickly in the tannoura, it most likely starts to set almost immediately, before there is a chance for the little bubbles to join together into one big bubble. But a 500° oven is a far cry from a tannoura, and so a quick burst of heat isn’t necessarily the best thing. With the fast, direct heat of the pizza stone, the bread bubbles up before it has a chance to set and crisp. The setting and crisping then happens once it’s already bubbled up and you end up with a really monstrous orb that shatters into a million clumsy pieces. But with the sheet pan, the bread has a chance to cook just a little more slowly, allowing it to set before it has a chance to puff.

In this recipe, I added the extra step of docking the dough, or pricking little holes in it with a fork. If you perfectly execute everything else, you don’t need to do this step, but for us mere mortals, it’s not a bad idea to take the extra precaution. 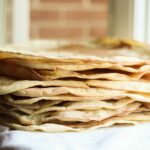 For the khmira | flourless starter: