Muhammara is a Syrian spread, which literally means “reddened” in Arabic. And it’s not hard to see how it got its name. In a little while, bell peppers will be in season in temperate climates. And using high quality peppers makes muhammara turn a deep, dark shade of red. While it looks nice and shiny with a drizzle of olive oil, it looks even more dramatic with little puddles of maroon pomegranate molasses.

Before we dig in, there are just a few things to keep in mind to make sure your muhammara turns out super flavorfully. No one wants a bland dip!

How to make super flavorful muhammara

You begin most muhammara recipes (including this one) by roasting red peppers over a flame, which chars the skins and softens the interiors.

Once the skins have sufficiently charred, and the peppers have spent some time steaming, the burnt skins will easily slough off, and the pepper flesh will maintain the roasted flavor with just the tiniest bit of char clinging to it.

To add even more toasty flavor, my own personal technique is to pan-roast the walnuts and breadcrumbs before adding them to the dip. The cumin, likewise, gets toasted for just a few seconds to tone down its raw flavor and highlight its nuttiness. If you think you don’t like cumin, I encourage you to try toasting it this way before cooking with it. It really makes a difference.

Pomegranate molasses is usually added to muhammara, because it’s the perfect counterpoint to all that roasted flavor, and it’s especially important in this one, since there’s more roasted flavor than usual. It brings a lot of acidity and brightness, which also highlights the flavor of the peppers.

And the crushed red pepper is just the thing that always sends muhammara over the top.

There’s so much going on with this dip: acid, heat, char, and toast. It’s just right for spreading on pita bread, or serving with a dish that needs an extra something. Try it on some vegan pizza (manakish muhammara) or serve it with flatbread. 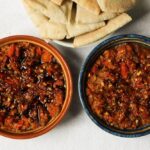 * If you don’t have a gas stove, you can use your oven’s broiler or a grill, using the same method and checking frequently.

** If you don’t have a food processor, you can easily do this by hand. Very coarsely chop the red peppers on a cutting board, add them to a bowl, and use a potato masher to combine the peppers with the rest of the ingredients. You could also use a mortar and pestle, as Ottolenghi suggests. It’s harder to over-process by hand, but be careful to stop as soon as it turns into a chunky paste.