When I was a kid, we would often go to Andersonville to see my great grandfather, his sister, and my great uncle’s family. Umtie Yasmi would make a big pot of chai and thaw some kadeh. She would cut it into a beautiful trapezoidal design.

The freezer was always packed to the brim with loaves of kadeh, some with a middle layer of martookhah, or golden-brown roux, and some without. I was thinking about these memories recently, so I asked my Aunt Masy to teach me how to bake kadeh. And I’m so glad I did, because this is the kadeh of my childhood in all its buttery glory.

The most important thing in learning to bake like your elders is making sure you record the butter carefully. Because there is always more butter than you could ever imagine. Don’t let the adorable granny demeanor fool you: they will lie about this to protect you from knowing how much butter you’ve really eaten in your life. So instead of asking Masy how to make kadeh, I watched her make it and took careful notes. And I’m so glad I did, because I would have never guessed two and a quarter sticks.

But if you’re looking for a way to help two and a quarter sticks of butter become their best selves, kadeh is the answer. It is a love letter to butter. The dough is a rich brioche, with so much dairy fat that you don’t use flour to roll it out. There’s just enough flour to hold everything together and to give the yeast something to nosh.

As if a rich-brioche dough weren’t enough, the inside gets filled with a buttery roux, which might sound strange if you’ve only ever encountered roux when making béchamel or gumbo. But if you’ve ever licked the spoon early on while making mac and cheese, I’m sure you’ve thought to yourself, “wow, this would make a really good sandwich.” And I’m here to tell you that you can totally make a roux sandwich, and it’s just as delicious as you’ve secretly dreamed.

There’s not much more to say about kadeh, since it speaks for itself. It goes great with chai, as a not-too-sweet dessert. And my mom loves to split hers open and spread some grape jelly over the martookhah.

Kadeh is particularly beautiful when you cut it the traditional way. Just slice a few chunky strips horizontally, and then cut each strip in half on a bit of a diagonal to make little trapezoids.

It’s great the first day, but it stales just like any homemade bread. So you should store it in the freezer and then reheat before serving. Kadeh freezes beautifully, especially before slicing, so don’t feel like you’re losing anything by doing so. 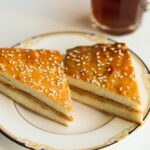 * If you overcorrect by adding too much butter, you’ll see a lot of butter pooling on the surface. Simply catch the problem toward the beginning, and add 1 or 2 more tablespoons of flour. The measured amounts in the ingredients list are tested, so you should be fine with just 10 tablespoons of butter and 3/4 cup of flour. But always trust your common sense more than ingredient quantities.

** if you’ve kneaded the dough into a smooth ball, you should not need any flour to do this, since it will be both buttery and glutinous.