If you learned to make falafel from a grandparent who’s been making them forever, or if you’ve read a food science book or two, you probably already know two secrets for really good falafel: 1) start with raw soaked legumes, and 2) raise their pH with baking soda (or another similar edible base).

If you’re already sold and just want to skip ahead, feel free to jump to the recipe, which will explain how long to soak chickpeas to make falafel and how much baking soda to use in the soaking water and falafel mix. Or if you’d like to read more about my falafel experiment, feel free to read on to nerd out with me.

Raising the pH of the mix solves a very important problem:

Without baking soda, the raw, soaked chickpeas will have a difficult time cooking all the way through in such a short deep fry.

A very small amount of baking soda helps bean starches burst and gelatinize more quickly, so it’s the perfect thing for their brief dip in the deep fryer. Baking-soda-free balls would remain quite mealy and raw-tasting after frying, and they’d never really get to become the light and fluffy falafel we all know and love.

Some folks add baking powder to the mix instead, which is a combination of an acid and a base; but baking powder is overall slightly basic, so it has a similar effect on chickpeas (if this makes you go “wait, how?!”, scroll down to the note on baking powder that’s above the falafel recipe). There are a few other tricks to making sure the chickpeas cook up nice and fluffy, so baking soda/powder is not absolutely essential to good falafel, but it’s a commonly used technique and works like a charm.

why it’s important to start with raw soaked chickpeas

Raw chickpeas are a non-negotiable.

Why not just start with cooked chickpeas and cut out the need for baking soda in the first place, you might ask?

Well, that would be a bit like making hash browns by starting out with mashed potatoes; I have to admit, fried mashed potatoes do sound delicious (I mean, that’s kind of almost like tater tots or potato chop, right? 😍), but they’re just not the same thing as hash browns, which absolutely must be made with raw grated potatoes to get the right texture.

If you ask me, recipes for deep fried balls of already-cooked chickpeas should really be called something more like “falafel-inspired bean croquettes” or “garbanzo-tots.” I mean, don’t look at me—naming things is not my strong suit, but those balls could take branding lessons from tater tots. Tater tots don’t try to masquerade as hash browns—they’re tots, and they’re very ok with that! But words mean things, and that’s especially important in preserving some essential features of cultural food icons like falafel. But anyway, I digress. On to the testing!

What we already know, and what I’m testing

So anyway, we know that raw soaked chickpeas are essential for good falafel, and we know that baking soda helps them get that desired fluffy texture. Plenty of people have proven that using science and traditional practices. So I didn’t bother testing whether you can make falafel from canned chickpeas, or whether baking soda solution works better than plain old water, since we already know those answers (you definitely can’t, and it sure does!).

Instead, to satisfy my own curiosity, I thought it would be interesting to test different soaking strategies, asking two questions:

Why I’m testing these two variables

But even more than the question of when to add the salt, I was super curious exactly how long chickpeas need to soak. I’ve always soaked mine for about 12 hours, but wondered if soaking them longer might lead to a significantly fluffier final product.

How the testing works

I tested 4 different soaking times/strategies, as well as 2 different kinds of soaking solutions, for a total of 8 different mixes.

The 4 soaking strategies were:

here’s what I found

The bottom line: It doesn’t really matter whether you add salt later or earlier in the process, although the beans that were salted later were slightly fluffier overall. What matters the most is whether you soak your beans for as long as possible in baking soda solution. The best falafel of the bunch were soaked for 24 hours in a baking soda solution, with salt added directly to the mix instead of to the soaking liquid.

While the 24 hour baking soda falafel were the best, the 16 hour baking soda ones were also decent. The ones that soaked for 24 hours in the refrigerator did not take in enough water and were some of the worst (refrigeration really does seem to slow down the soaking process). The ones soaked for 12 hours were similar in texture to the refrigerated ones—12 hours at room temperature is not long enough to yield the best results.

What this means for you: If you’re short on time, you can absolutely get away with soaking the beans for 16 hours, as long as you use baking soda water and salt them later by adding it directly to the mix. And if you want the absolute best falafel, soak the beans for a full 24 hours in baking soda solution, changing the solution about halfway through. If you’re soaking them for 24 hours, you can get away with adding salt to the soaking water, but they’ll be just a tiny bit fluffier if you add salt to the mix instead and just stick with baking soda water for the soak.

While I did take care to measure everything exactly and eliminate as many variables as possible (same fry temperature and time, same quantities of ingredients in each batch, down to the gram, etc.), obviously this is not a perfectly controlled scientific study, and there are a bunch of confounding variables and things I’d want to test next time. Here are a few important things to keep in mind in your own falafel experiments:

a note on baking powder in falafel

Baking soda is certainly a base, and you might think baking powder is entirely neutral, but baking powder is actually somewhat basic too (at least according to my test strips and the brand of baking powder I use—if you’ve got some pH strips and baking powder at home, please feel free to test yours and let me know what you get!), so I postulate that it lowers the pH of falafel with an effect similar to baking soda. However, baking powder is less strongly basic so it needs to be added directly to the mix to have the same effect, and it also adds a bit of airiness from the carbonation produced from its reaction of acid/base. It’s really up to the cook whether they want to use one or the other.

I determined that baking powder is basic by running a few pH tests. I suspected it might be basic because it always reacts with fruit and other things as if it is a base (e.g., it turns strawberry cake batter purplish, just like baking soda does). I ran a few tests where I dissolved the same amount of baking powder and baking soda separately in the same amount of boiling water. I then stirred to dissolve each and measured their pH levels. The baking soda solution was very basic (as you might imagine, it’s pH is 9 or possibly higher, since my strips have an upper threshold of 9), and the baking powder solution wasn’t far behind, at around 8 or 8.25.

One strange thing I had not anticipated is that it is impossible to get baking powder to dissolve completely in boiling water (at least the brand I was using). I stirred and stirred, and even tried a separate test where I simmered a small amount in water for several minutes, and it never fully dissolved no matter how long I simmered and agitated it (also no matter how strong or diluted I made the solution). I even let the solution sit for a couple hours at room temperature after boiling, to see if it made any difference, and the pH actually seemed to rise about 0.5 or 1 from where it started.

This is kind of annoying, because it means that I can’t get a truly accurate reading of baking powder’s pH. But it’s still useful because it means that it’s at least effectively basic when cooked with. Since those little granules won’t dissolve after boiling, I’m assuming they also won’t dissolve in other cooking situations. Perhaps if these granules could ever dissolve completely, the pH would indeed be different, but they don’t, so it’s effectively basic in any case.

Anyway, I’ll be amazed if anyone is still with me at this point, and if you are, thank you for coming to my TED talk, and here is a falafel recipe for your patience. It’s very similar to my old one, but I’ve updated it a bit and included some metric measurements.

the best way to make falafel 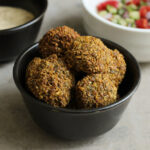 to soak the beans:

to make the falafel mix:

to fry and serve the falafel:

* If you don’t have any baharat and don’t feel like making a complicated spice blend, feel free to use a combination of cumin, coriander, paprika, and black pepper.