I live in the southern hemisphere, but most of my friends and family (and most of the people who read my website, according to my google analytics… hi there! 🙋🏽‍♀️) live in the northern hemisphere. So apologies for the belated tomatoey post. But I’m hoping I made it just under the wire with this fabulous gazpacho, flavored with my favorite fattoush ingredients. Find those last juicy tomatoes of summer, and make it happen.

I’ve been working on some version of this recipe pretty much ever since I started this blog over three years ago. But I only recently finally figured it out. Feel free to read about this soup’s ugly duckling origin story, or jump to the recipe or the gazpacho tips.

Long long ago, this was a hot lettuce soup. “Hot lettuce soup” is admittedly better than it sounds, but (alas!) worse than actual good soup. Eventually, that hot lettuce soup turned into a chilled gazpacho with absolutely no lettuce in sight. It was the most delicious gazpacho I’d ever had, but it was also the ugliest thing I’d ever created. The problem: fattoush is made up of a bunch of bright green things and a bunch of bright red things. And what do you get when you put those two colors together in a blender? You guessed it—beige soup! Not great!

Then finally, I figured it out. Two batches! Make one for all the green stuff, one for all the red stuff. Pour them together in a bowl, give it a teensy swirl, and you’ve got something that’s as beautiful as it is delicious.

Don’t bother washing your blender between batches. Just move the first batch to a storage container, give the blender a quick rinse, and move onto the next. Toast up some pita chips, pile them high and sprinkle with sumac, and you’re good to go.

Before I get to the recipe, let me just leave you with a couple quick gazpacho thoughts. Numbers 1 and 3 are somewhat hot takes. But if you’re on the fence about gazpacho and chilled soups in general, they’re absolutely essential.

To make traditional Andalusian gazpacho, you blend a piece of bread in with the veggies. But many recipes omit the bread, arguing that it’s just filler. But I strongly encourage you not to skip it! Far from diluting everything, a little piece of bread helps carry all the other flavors. It also softens some of the punchier notes, sort of like adding a splash of cream to your coffee.

So if you’ve ever had gazpacho and felt a bit like you were just made to suffer through a vodkaless bloody mary, allow me to be so bold as to say that I think you might actually enjoy one made with that little bit of bread blended in.

I’m not usually a big fan of soups that have a totally smooth consistency, which is why this fattoushey version of gazpacho is my favorite. The pita chips absolutely make the dish for me. If you’re like me, feel free to double the pita quantities in the recipe below so you’ll have plenty to serve. You may need to work in batches or use a wider pan. The photos in this post show the amount I usually start with (and perhaps the amount a normal human person would prefer to eat), but I tend to keep a bowl of pita chips nearby so I can add as many more as I want. Don’t ration them and feel free to go nuts!

3) have tomato paste on hand, especially if your tomatoes are lacklustre

There’s an ingredient in the recipe below that I have a feeling may irk some folks—and that, dear reader, is tomato paste. But honestly, it’s my secret to a super flavorful gazpacho, even if you’re stumbling upon this recipe deep in the heart of winter with intensely mediocre imported produce. On the other hand, if your tomatoes are just so perfect that you think they won’t need the boost, feel free to omit it. You can always add it after blending and tasting. But make sure you have some on hand, just in case they’re looking a little wan. 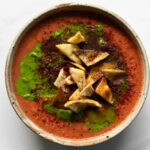 for the pita chips:

Previous Post: « the best way to make falafel + a recipe
Next Post: How to write a reliable recipe »