Watermelon (or shaptiya) is important to Assyrian cuisine, but it’s not really the kind of thing we usually do very much to. And it’s not that we usually eat things in their simplest forms; for instance, give us some yogurt, and we will spend days alchemically transforming it into hundreds of variations. We’ll stew up a pot of yogurt and swiss chard soup, we’ll simmer kibbeh in a yogurt broth, we’ll strain it and make labneh, we’ll eat it homemade as a savory or sweet snack, and we’ll even spoon it over prakhe. And that’s just the short list of yogurt-related recipes and pairings currently on my mind.

But watermelon? In my experience, it’s always served straight up. And that’s for good reason, because when it comes to watermelon, you really don’t need to do much to make it delicious. Chill it, split it open, sprinkle on a tiny pinch of salt, and enjoy the most refreshing summer treat. This beautiful simplicity is what made me think of Jerusalem salad when I was dreaming up other ways to serve watermelon. At it’s most straightforward, Jerusalem salad is just finely diced tomatoes and cucumbers, and this understated elegance is preserved even with the addition of another ingredient, watermelon. The watermelon itself looks just like the tomatoes, but it tastes a lot like the cucumbers, so if you were to serve this as a Jerusalem salad to friends, they might not be able to put their finger on what’s different about it (besides the glaringly different feta cheese). When you introduce something that doesn’t fall in line with the tomato-cucumber binary, the flavors become just a little harder to pin down.

While I love watermelon, it comes with a couple hang-ups. First of all, there’s nothing worse than cutting open a mealy, bland, and pale one. The natural solution is to only shop for watermelon when it’s in season, but this isn’t always enough to guarantee ripeness. And you know a ripe melon when you taste one: it’s got that perfectly deep coral color, juicy, toothsome texture that’s not quite crunchy, but never soggy, and that delicious melon flavor that’s sweet, but with a hint of refreshing cucumber. You should definitely try to shop for melons when they’re in season because this gives you the best chance, but it’s totally possible to get a dud in the middle of July, and it’s also possible to get a perfect melon in the dead of winter.

So when you can’t just rely on knowing the season, selecting a good melon might seem totally perplexing. But it’s actually somewhat straightforward if you know what to look for. Watermelons need to ripen on the vine, and there are two easy ways to tell whether a melon has had enough time to ripen.

So if it’s in season, it feels heavy for its size, and it has a very yellow patch, you’ve found a good one.

So we’ve talked about how to find a good one, but (at least for me!) the other watermelon hangup is all that waste. First, there’s the huge pile of watermelon rind left over after you slice up all the pink stuff. And then there’s the other three quarters of a watermelon left over after you’ve made a big salad and eaten nothing but those adorably cheerful wedges for days. They start to seem a little less cheerful on day three right? There’s going to be a bonus post addressing the second problem in a few days (i.e., I’ll give you a few ideas of how to use up all that leftover watermelon, with very few additional ingredients). But this salad tackles the first problem, since I ask you to make a quick pickle of some of the watermelon rinds.

I’ve definitely been known to make some questionable meals out of extremely questionable leftover food scraps, because I just hate to see anything go to waste. But my own frugality and environmentalism aside, I’d never insist that you do the same if I didn’t think it tasted good. So I can say with total conviction that this watermelon rind quickle truly tastes good. This salad is not the same without it.

If you’ve never eaten watermelon rind, you might be skeptical, but it’s actually a really common ingredient in a few different cultures. A watermelon rind preserve post will have to wait until next summer, because I don’t want to turn this into an exclusively watermelon-themed-content food blog, and I’m afraid it might start to seem that way after this week. Before I get to the salad recipe, I’ll just leave you with Iraqi food blogger Sara Ahmad‘s beautiful post about watermelon rind preserves. “At thirty, I’ve surely tasted so many peculiar flavors that it must be rare to be so startled, and by something that looks and feels like a basic marmalade. Yet, here I am, confronted with a taste unlike anything I’ve ever had before. This sparks one of those trite deeply personal inspirations: there is so much life out there.” 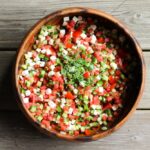 For the watermelon rind quick pickles:

* For this recipe, a firm feta is best. If you’re using a soft feta, you should instead crumble it into big pieces and be extra careful when folding it in. If it’s soft cheese, don’t try to evenly distribute it or the pieces will just dissolve.
** Feel free to check out my original Jerusalem salad post if you want to see why I like to salt and strain Jerusalem salad. I’ve also got a recipe for Jerusalem salad pico de gallo, which doesn’t require straining.