Potato chop is a crunchy deep-fried potato croquette with a super flavorful sautéed beef filling. It works great as an appetizer or passed hors d’oeuvre, and goes wonderfully with tabbouleh.

Iraqi-Assyrian potato chop is remarkably similar to an Indian dish of the same name, and I would be surprised if it didn’t make its way to Iraq by way of India. There’s a lot of overlap between Indian and Middle Eastern food, with a particularly strong connection between Iraq and India (take amba and biryani, for example).

But—assuming Iraqi and Indian potato chop have a shared origin—the two dishes have each developed some subtle differences. The two most notable differences are the particular spices and the heaps of parsley in most Iraqi versions.

a few notes about this recipe 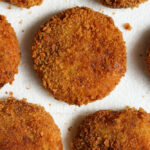 For an easier version, try my potato chop skillet

For the potato dough:

To assemble and fry:

* If you mix up a batch of my baharat, you could just use that instead of this blend of spices.