Is there a rule that all cold weather fruit has to start with the letter “p”? Either way, it’s November, and I can’t get enough pomelos, pomegranates, persimmons, and pears, which are crowding out the one free shelf in my kitchen. I’m not a true stickler for seasonal produce, but I do believe in eating as much of it as possible, because it’s both delicious and sensible (an unbeatable combination), and maybe even a little poignant because of its impermanence. So when the farmers market shuts down, and the tomatoes at the supermarket start to look a little mealy, pale, and unpleasantly crunchy, it’s time to change up your tabbouleh routine with some pomegranate seeds.

This recipe for pomegranate cilantro tabbouleh doesn’t leave the tomatoes out altogether, although you absolutely could, and their absence wouldn’t be unprecedented. During winter months when fresh tomatoes aren’t available, tomatoes are traditionally left out of tabbouleh. Plus, I’ve also got a recipe for tomatillo tabbouleh verde, which subs these green, crunchy fall nightshades for the tabbouleh-standard red summer tomatoes.

But in this recipe, the post-summer, slightly sad tomatoes are helped out by the added pomegranate seeds. They add the bright red color sorely missing from summer produce in October (go figure!), and they also bring a lot of sweetness and zest, which is missing from pale tomatoes. Pomegranate and cilantro are a perfect match, and so I’ve also replaced the traditional parsley with bunches of cilantro. But if you’re one of 10% of people who taste cilantro as soap, certainly feel free to use parsley instead.

A few recipes notes: I highly recommend removing your pomegranate’s seeds in a bowl underwater, which prevents them from spraying juice all over the place, and also makes it easy to separate the pith from the seeds. Also, since this dish uses cilantro instead of parsley, it won’t hold up as well over time. The leftovers aren’t as good the next day, whereas parsley-based tabouleh tends to last for a few days in the fridge. So this tabouleh is best served right away, or up to an hour after mixing it up (but fortunately, leftovers aren’t usually a problem here).

And just a quick note, in case you were worried: don’t think I’ve forgotten about Thanksgiving. I will post a full menu plan (featuring a different pomegranate tabbouleh) very soon. 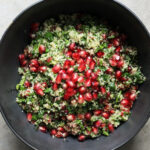 * You can find burghul #1/fine bulgur at most Middle Eastern grocers. If you can’t find a source near you, you can substitute couscous, cracked wheat, or coarse bulgur. However, these will need to be cooked in boiling water, according to the package instructions (or until al dente), rinsed, and then soaked with the tomatoes and lemon juice for about ten minutes. Burghul #1 is pre-cooked and very fine, so it doesn’t need the extra step of being cooked in boiling water.