I remember when I was a little kid, I would always watch the French Chef reruns on PBS at my grandparents’ house. I loved Julia Child for the reasons we all love Julia Child, but especially for all her pedagogical quirks. Like, I loved the way she explained how to add nutmeg to something. She would hold the nutmeg grinder over the bowl, and run it over the rasp just a couple times to dramatize her point: “just a little speck in there. You don’t want people to taste it and say ‘nutmeg!'” In one video (which I have yet to find online), she holds a nutmeg grater with a crank over a big pot of something, and taps the crank with one finger, like she’s trying to diffuse a bomb. There’s something kind of funny about watching someone try very hard to emphasize understatement. It’s not an easy task, and one she handled with her usual charm and wit.

Indeed, it’s inherently difficult to convince people that they don’t need to rely on bold flavors. It’s hard to hit someone over the head with subtlety. It’s impossible to convince someone who loves adding eight cloves of garlic to everything that, in fact, sometimes less is more. But sometimes, flavors aren’t there to be bold, and are there to support the star of the dish. In the case of this (truly) dreamy galette, that star is the fig, and everything else is just trying to help the figs be the best they can be.

This galette is flavored with rosewater, cinnamon, and cardamom, but you shouldn’t be able to taste these notes very strongly in the finished pie (or else it would be called a “rosewater, cinnamon, cardamom fig galette”). They’re only present to highlight the figgy flavors, not to talk over them. If you’re expecting the galette to taste like a chelsea bun, you might even be a little disappointed—and while I think it would be totally delicious with way more cinnamon, I urge you to add the amount in the recipe and see what you think. The little bits of warm spices and floral rosewater really help the figs shine and taste even more like themselves. They’re the fairy dust that the galette needs to sparkle.

In addition to the beautiful flavor, there are a whole lot of other compelling reasons to make this galette:

1) It’s very low in added sugar. You only add one and a half tablespoons granulated sugar and one and a half tablespoons honey to the whole entire thing. The rest of the sweetness comes from the figs themselves. So, if you’re looking for something rich and sweet to serve for breakfast, without a lot of added sugar, this galette isn’t actually the worst thing for you (um, just ignore that stick of butter…).

2) Speaking of that stick of butter (what stick of butter?), this crust is unbelievable. The crust recipe below is adapted from Rose Levy Beranbaum’s cream cheese crust, and there’s a lot to love about it. First, even though you use a food processor to make it, it turns out unbelievably flaky. I came up with with a different method of preparation to make it even flakier (you add the butter, and pulse it until it’s still very chunky, and then add the cream cheese). But even though this is one of the best crusts I’ve ever had, I think my favorite thing is that the recipe calls for three ounces of cream cheese, which means you have the perfect amount left for a galette filling. Yes, you heard me right—no leftover cream cheese!

3) Galettes are so much easier (and prettier?) than pies! I’m better at the kind of food styling that looks casually sophisticated, as I think most people are. Those pie crusts that require an exacto knife and three free hours are beautiful to look at on Instagram, but not easy to accomplish in real life. But this galette, on the other hand, will actually look worse if you try trim every bit of uneven edge away before folding the sides over. The more rustic, the better! 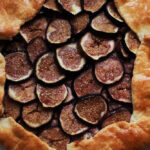 For the cream cheese crust:

For the cream cheese filling:

To assemble the galette:

* If you’re not weighing your ingredients, you should hold back a little bit of the water, and add it gradually, just until the dough ball forms. Or you might need to use a little extra water. But if you’re using an accurate scale, you should be able to just add everything at once, and trust that it’ll come together just fine.

** The rosewater, cinnamon, and cardamom are here to highlight the flavor of the figs. They make the figs taste even figgier, without stealing the spotlight. But if you want to add extra cinnamon, or even a tiny bit extra rosewater or cardamom, it’ll still be delicious, but it will become a cinnamon fig galette. Careful not to overdo it with the rosewater and cardamom.