My grandmother and I recently went about solving a cheese mystery. On her family‘s farm in north-eastern Syria, they would make a homemade cheese that they would bury under ground in clay pots. They called the cheese gubta mtumarta, which means “buried cheese” in Assyrian. The name tells you more about the way it’s stored, rather than giving any hint of the kinds of cheeses used, which didn’t help us much in backwards engineering her family’s recipe. But luckily, we had some information to go on, and we headed over to the Whole Foods cheese section to try to get to the bottom of things.

We knew that her family’s gubta mtumarta involved caraway seeds and some combination of three cheeses crumbled together. She remembered the method of preparation really well and remembered lots of details about the cheeses they would use, but it’s really difficult to figure out what cheeses to buy at a supermarket cheese counter in order to best emulate the flavors and textures of farm-made, unnamed Syrian cheeses.

Here was the information we had: The first cheese tasted like feta, but without the brine. It was a not-too-salty, medium-soft cheese that added a creamy texture to the mix, but without adding too much moisture. It bound the crumbly, hard cheeses together. The second cheese was a lot like parmesan–very salty, dry, and crumbly. The third cheese was similarly crumbly, but not quite as salty or hard, with a subtler flavor. The two harder cheeses would get ground up into little pieces and mixed together with the creamier cheese to form a crumbly paste. The harder cheeses would add enough salt to help preserve the softer one and the whole paste would get mixed together with caraway seeds to add a really lovely, distinct flavor that most Americans associate with rye bread.

We chose three Mediterranean cheeses for our recipe for gubta mtumarta. For the first, soft cheese, we chose manouri cheese, which is similar to feta, but without the brine and strong feta flavor. The second cheese was easy, since parmesan was the obvious choice. For the third cheese, we found a hard, aged provolone piccante with a little less salt than parmesan and a slightly higher moisture content.

We minced the cheeses finely and combined them with the caraway, and when she tried the finished product she said that she couldn’t wait to deliver some to her brother, Badel, because it was exactly like the gubta mtumarta that she remembered. While I never tried the gubta from their farm, I can confirm that this recipe is beyond delicious spread on toast, melted on a burger, sprinkled on biryani, or added to tabbouleh. On Easter, Yemmah Sourma would put a little cheese in the center of one of the samooneh before baking the rolls, and whichever kid got the cheesy samoon got an extra little gift for Easter. But if you ask me, getting the only samoon full of gubta mtumarta is a gift in itself. 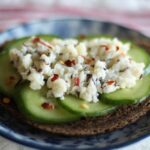