It’s barely a walk from our apartment to one of our favorite restaurants in Hong Kong, the izakaya Okra Kitchen. Naming a restaurant after a polarizing vegetable is the kind of thing I could totally see myself insisting on, and I happen to be strongly on team okra, so I was sold right away. We most often find ourselves ordering their brussels sprouts, which are deep fried, sprinkled with boozy Xinjiang raisins, covered in their special sauce, and piled high with julienned radishes.

So lately I’ve been making a more home-cooked Middle Eastern version of this for quick weeknight meals and holiday celebrations, with yogurt tahini sauce, pickled apples, a little crushed red pepper, and my favorite magical thing I learned from my grandmother: roasted raisins.

why roast or sauté your raisins?

Even before I knew what roasted or sautéed raisins were, I loved them in riza sh’ariyeh (jeweled rice with vermicelli noodles). I’d always strategically scoop rice onto my plate to end up with extra topping. If we had guests over, I would do this as tactfully as possible, but if it was just our immediate family, all civility went out the window and I was shameless.

It wasn’t until I learned how to cook riza sh’ariyeh a couple years ago that I learned what made the raisins in it so delicious. It turns out, my grandmother sautés them briefly in butter, before sprinkling them on top of the rice. It takes so little time that it may seem like an insignificant detail, but it’s everything.

When I’m cooking on the stove, I sauté them in a little butter, but when I’m roasting, I like throwing them on the sheet pan for the last couple minutes, just until they puff up a little and caramelize slightly. In this brussels sprouts recipe, you sprinkle them on after the sprouts have started to caramelize, so they can broil for a minute or so. Top everything with yogurt tahini sauce, pickled apples, and crushed red pepper, and be sure to watch out for strategic raisin scooping at the dinner table. 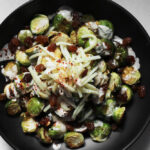 for the yogurt tahini sauce:

for the quick pickled apples:

for the roasted veggies:

* To make this vegan, instead make a lemon tahini sauce. Also be sure to use oil instead of butter when you roast the raisins.