I’m not one for making big splashy statements. But since oatmeal is probably the least splashy food of all time, maybe you’ll allow me just one. The way we have all decided to cook our oatmeal is not making us happy! We have turned oatmeal into a stodgy blob, and it is no longer living its best life. If you enjoy that gloopy texture, or if you’re already a fan of creamy oatmeal, you can totally sit this one out. I am not here to yuck your yum, or to tell you something you already know.

This post is for everyone who finds oatmeal to be a constant disappointment. So if oatmeal makes you feel as though your own personal malaise has somehow manifested in a non-newtonian fluid, this post is for you. Only 6% of folks in the US consume it (4% in the under 35 age bracket). So even though you’re here voluntarily reading about oatmeal, I have to imagine you might have some reservations.

Oatmeal was never my personal favorite, until I started recreating the creamy oatmeal my grandmother makes. A lot of other Assyrian and Middle Eastern porridges share a similar texture, and the technique is always super easy:

For silky-smooth and creamy oatmeal, use way more liquid than the side of the box tells you to.

Drown your oats with water and milk and simmer until they go from watery to velvety smooth. Then pour (yes, pour! not plonk!) some into a bowl and top with your favorite fruit. With stodgy/gloopy oats, the fruit pieces tend to perch atop the rock-hard surface like ducks on a frozen lake. But you’ll know you did something right when your fruit pieces gloriously nestle into the porridge.

Before I get to my recipe, I’ve got a little intro to creamy oats:

There are lots of different kinds of oats, but there are three popular ones that you should know about. This post is a love letter to old fashioned rolled oats. But I’ll be referring to the other two as well, so you should know the differences:

why rolled oats are under-appreciated

While steel cut oats have a pretty strong fan club, old fashioned rolled oats tend to go under-appreciated. I think that’s because folks often ask rolled oats to behave in a way that doesn’t play to their strengths. Here are a few ways I believe rolled oats are misunderstood:

1. You can’t replicate the chewy texture of steel cut oats in rolled oats:

Steel cut oats are a great idea if you’d like to really embrace the chew (though they are very versatile, and also work perfectly well in a silkier, creamier porridge). But old fashioned rolled oats are wonderful on their own terms, and are best made into a velvety, creamy porridge. Unfortunately, most recipes use way too little liquid in an attempt to create a steel-cut-adjacent texture. This results in a stodgy gloop. Best not to try to make your old fashioned oats behave as steel cut oats.

Some have tried to solve the mushy oatmeal texture problem by introducing an overnight soak for rolled oats. This supposedly retains their chew and texture. Full disclosure, the texture of overnight oats is just not for me (though again, not yucking your yum). But even if you enjoy overnight oats’ texture, you have to admit, they’re not exactly chewy. Rolled oats just can’t be expected to “retain” their chew, since they were never really chewy to begin with.

3. The ingredient ratios on the old fashioned rolled oat box are questionable:

This is the original sin, which led to the need for such interventions as overnight oats and chewy steel cut. Following the ingredient ratios on the box of rolled oats results in the gloopiest oatmeal texture ever, one that sets up even before it hits the bowl. There’s just not enough liquid.

If you don’t like oatmeal, it might just be because you’ve had it prepared this way. Again, I’m not here to tell you to stop enjoying something you love. But given oatmeal’s staggering unpopularity, as well as the entrenched status of this cooking method, I have to assume this method of preparation is not working for many people.

4. Instant oats give people watery oats anxiety, but “watery” is not the same as “smooth and creamy”:

Whenever I tell someone that I add a lot of liquid to my oats to make them super creamy, people often respond by saying “hmm, but wouldn’t that just make them super watery and mushy?” If you’ve ever had instant rolled oats steeped in boiling water or milk, you’re probably familiar with that watery/soggy texture. I’m pretty sure the soggy disaster of instant oats is the reason folks are afraid of adding more liquid to their old fashioned rolled oats. But this sets up a totally false dichotomy between watery/soggy oats and gloopy/stiff oats. There is a creamy alternative out there, which is nothing like either.

If you’ve never made oatmeal this way, you’ll probably feel like you’ve made a huge mistake at first. Indeed, it looks like an awkwardly large amount of liquid for such a small amount of oats. It will look incredibly watery at first, like instant oats gone horribly wrong. But after about 15 minutes, its starches will swell and burst, a small amount of the liquid will cook off, and it will magically thicken into a velvety texture. It might still look slightly too thin, but it will set very slightly as it cools at the table.

As my grandmother would probably want me to remind you: Don’t forget that this method has fewer calories than thick gloopy oatmeal (depending on the kind of milk you use). So be generous with the serving size if you’re hungry. It’s very light, so you might want to eat a bigger bowl than usual if you like to start off your day with a big breakfast.

a world-wide love of creamy oatmeal:

This cooking method isn’t limited to just my family. When I lived in Hong Kong, I’d order porridge in cha chaan tengs, and it always shared the same texture. When my sister visited Peru, her host families all cooked their oatmeal the exact same way. In Melbourne (where I live), porridge is on every brunch menu, and it’s always perfectly silky smooth, never gloopy (and often topped with macerated rhubarb, *swoon*).

I also recently asked friends from our intersectional food writers’ facebook group, and we shared a similar experience of smooth and creamy oatmeal, having grown up in Indian, Filipino, Jewish, Puerto Rican, Korean, and Assyrian families (thanks Celeste, Nandita, Jessica, Caroline, Twilight, and everyone!).

how to top it:

The following recipe includes instructions for macerating strawberries, a really easy method for preparing a lightly sweetened fruit topping. You can macerate pretty much any fruit (especially peaches, plums, nectarines, other berries, etc.) by sprinkling them with a little sugar, and letting their juices accumulate in the fridge for at least 30 minutes (more like 24 hours is ideal). Use the syrup that collects sparingly (or generously!) as a little sweetener.

I packed some macerated berries, rolled oats, and dry milk on a camping trip a couple weeks ago, and we had such a lovely breakfast of porridge and coffee. I mostly brought the oatmeal for myself, but for lack of anything else to eat, Simon accepted a bowl of smooth and creamy oatmeal with a weary smile, and ever since, it’s become his new favorite breakfast. It was a fun turn of the tables, since Simon has always loved the outdoors, and I am a city mouse who has suddenly started to love camping after being cooped up indoors all year. It’s a good time to try something new! 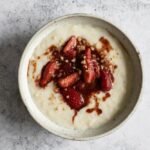 ** If you’re using a wide pan instead of a small saucepan, you may need to add a bit more water as it cooks (more water will evaporate from a wide pan).