Last week I promised I’d be back in March with some new recipes. But I just couldn’t resist bringing you these banana éclairs a little sooner, just in time for Valentine’s Day. Whip up a batch, box up a few to leave on your friends’ doorsteps, and don’t forget to save a few for yourself.

There’s a lot of technical stuff involved in éclair baking, but I’ve included all the important details in the recipe for orange blossom banana éclairs at the end of this post. So you should be able to tackle this project even if you’ve never worked with choux pastry before. It’s actually not as impossible as it seems, especially if you measure everything in grams. While éclairs do feature three separate components, each component is actually extremely doable.

Growing up, my family would routinely pick up desserts from the Swedish Bakery in Chicago (now sadly closed). They have a special place in my heart as the small business that gave my family so many of their first jobs after immigrating to the US. But they also just objectively had the best cakes, cookies, and éclairs in the city. So whenever I make a Swedish or French pastry, I do so with their baked goods in mind. In particular, their éclairs had a few important qualities that stand out:

Éclairs are usually filled with crème pâtissière (a custardy pastry cream). But the Swedish Bakery’s was significantly thicker than other éclairs I’ve tried. My ideal éclair’s creme pat doesn’t run or ooze easily, sets up super firmly after chilling, and doesn’t make the choux soggy. This banana pastry cream might seem like it has a lot of cornstarch, but it’s essential for the right texture.

Removing your shells from the oven at the exact right moment comes with practice, and it’s important to err on the side of a little more done if you’re ever unsure, lest they collapse at room temperature. Ideally, you’ll learn to time it so that they’re crisp enough to completely hold their shape as they cool, but not totally dried out inside, and still holding onto a very slightly custardy layer.

While I accurately recorded the times and temperatures in my recipe, it’s important to use your senses. Pay attention to what the éclairs look and feel like when you pull them out of the oven. They should feel hollow and brittle on the outside, and they shouldn’t have much give when you gently squeeze them. If you go much further beyond this point, they will burn and dry out. But if you pull them a few moments too soon, they will collapse as they cool.

The following recipe is for orange blossom-flavored banana éclairs. But you can easily change the pastry cream, ganache, and decorations. Just make sure you follow the following substitution guide, whether you’re replacing the banana, the orange blossom, or both: 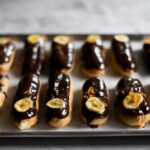 for ganache and decoration:

for the choux pastry:

for the pastry cream:

Storage: Store éclairs the refrigerator after filling and decorating. They will be best after about 1 hour of chilling, they’ll stay very good for several more hours. Try to make them within about 12 hours of serving if you’re making them for guests, but keep in mind that they’re still very tasty for a few days afterwards (they just might start to get some condensation on the ganache, and their shells will soften slightly in texture, but they shouldn’t become soggy). They generally keep for about 2 to 3 days before they decline significantly in quality.