There’s this great episode of This American Life from a few years ago, where Sarah Koenig interviews her mother about her list of the seven things you’re not supposed to talk about at a dinner party. One or two things on the list are clearly inappropriate for dinner conversation, but most things made her list because they’re just so boring to talk about. So naturally, I thought it would be a great idea to write a blog post that encompasses (not one but) two of the things we’re not supposed to talk about (in this case, diet and health)—and hopefully you’ll find me interesting anyway. So, here it goes—I’m Kathryn, and I’m a Middle Eastern food blogger who can’t eat eggplant.

When I was a kid, I used to eat eggplant all the time—we would always order baba ganoush with our takeout, and every summer my mom would grill up platters of portobello mushrooms, zucchini, and big thick-cut eggplant slices. When I was a vegetarian in high school, I ate even more eggplant (mostly because I thought it was a good source of vegetarian protein, because I was kind of clueless). And then eventually, it started making me really sick whenever I would eat it. My throat would get itchy, my tongue would swell, and my whole body would rebel. So finally, I had to give it up for good, and I haven’t had any in over a decade.

This means that recipe developing with eggplant is very hit or miss (and not blogging about eggplant is out of the question, because it’s an important part of the cuisine). Sometimes I make something with eggplant, feed it to friends and family, and they love it from the start. In this case, I would make it a couple more times with their minor suggestions, until they let me know it’s perfect, and then the final recipe would make it to my blog. But if an eggplant recipe doesn’t work out the first time, then it is simply dead on arrival, because there’s no way for me to figure out how to fix something I can’t actually taste. One of the best ways to avoid this DOA scenario is to stick to family recipes, which are already vetted by generations. And this, sheikh mahshi, is one of those recipes.

Sheikh mahshi (also know as sheikh el-mahshi) are not only beautiful but they’re also delicious, or so I’ve been told (I did taste the stuffing before it went into the eggplants, and it is absolutely scrumptious). My grandmother taught me how she makes sheikh mahshi, and I barely tinkered with her method to come up with the recipe below. It’s my husband’s favorite thing my grandmother makes, and I hope everyone who can consume eggplant enjoys this dish a little extra for me. 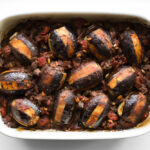 * You can easily find zucchini corers online, and in some Middle Eastern grocery stores. In addition to making dolma, they can be used for lots more (see the note at the end of my dolma recipe).

** Compress the edges of the cap and then work it into the top of the eggplant. Take the top and hold it so that all 5 fingertips are touching its edges. Gently squeeze the top so its diameter decreases, and place it in the eggplant opening. When it is sitting in the eggplant, the cap will flatten and it will be hard to remove it because the edges will catch. It’s a little finicky, but fortunately it’s also ok to just skip this step if it gives you too much trouble. A tiny bit of the filling might fall out during baking, but it’ll be totally fine.