(Jump to the ras asfour recipe.)

My grandfather was a hilarious and warm man who passed away six years ago. He was defined by his laugh, his jokes, and his far-reaching community of friends and family. Whenever he went on vacation somewhere far away, like Australia or Europe, he would find a phone book, look up the name “Yonan” and call whoever he found to say shlama. When he passed away, we spent months sorting through the thousands of family photos he left behind. My mom and her brothers divided them up in manilla envelopes with people’s names written on the back, and sent them out to grandkids, cousins, second cousins, third cousins, old neighbors, old friends, old colleagues.

In the hour before the funeral started, our immediate family gathered for a small, private viewing. My grandmother and the children and grandchildren stood around his casket and spent a long time there together, just crying and hugging, not saying much.

Toward the end of the private viewing, just a little while before guests were supposed to arrive, a man walked into the room, nodded at us silently, walked over to the casket, and broke down sobbing, as if he had lost a close family member. We all looked around at each other, and our mournful faces turned puzzled. We started mouthing questions to each other— Who is he? Have you met him before? Did they work together? Is this a long-lost friend from Baghdad? Does he look Assyrian?

This went on for about five minutes, until the man finally leaned in and kissed my grandfather on the forehead, at which point my grandmother walked over to introduce herself and to figure out who on earth he was. But as soon as the man said he was the brother of the deceased, it became clear that this poor guy was at the wrong funeral. When he realized his mistake (after a little back and forth of “This is Peter Ishu,” “No, this is my brother!”), he apologized, explained that he hadn’t spoken with his brother in decades and had no idea what he looked like these days, and all of us, including the interloper, fell out of our grief, just for a moment, like actors at the end of a scene. And as soon as the guy left, we shared a laugh, not exactly at his expense, but just at the ridiculousness of mistaken identity at a funeral, and the fact that my grandfather would have appreciated the situation more than anyone.

Ras asfour always makes me think of that time in our lives, and of the community that gathered around us. The private viewing was the only time that whole week we would be alone as a small family, and I’ve never seen a more crowded wake or funeral. So many people stopped by my grandmother’s house to bring her big pots of food, the whole place was completely packed for an entire twenty-four hours. The dining room table was covered with pots wrapped up in kitchen towels, delivered by people who I knew and loved, and cousins I had never met.

Auntie Helani brought ras asfour, which my grandmother explained means “birds’ heads,” a description of the teeny tiny size of the meatballs. I remember being touched by the care that went into making this dish—it takes so long to shape each one, and it’s such a thoughtful gesture to show someone that you were thinking of them. It always makes me think of my community, and the people who embody the same joyful spirit as my grandfather. 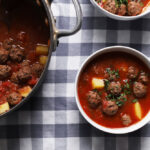