Last fall, I posted my recipe for potato chop, or breaded and fried potato croquettes stuffed with seasoned ground beef and parsley. Since potato chop isn’t something my family makes, I started from scratch with my own recipe, drawing on my memory of potato chops I’ve eaten in Iraqi and Assyrian restaurants, and asking around to hear how others have made theirs. Coming up with a recipe for something complicated that you’ve never made before requires a lot of test batches, and so I can’t tell you how much potato chop we ate last fall.

But once the marathon of croquette-stuffing and onerous deep frying finally came to an end, the only thing I was sick of was just that: all the stuffing and deep frying! I never once got tired of potato chop itself. So I decided to come up with something a little easier, but still inspired by classic Middle Eastern cuisine.

This recipe for potato chop skillet is inspired by kibbeh bil sanieh, which literally means kibbeh (Middle Eastern dumplings) in a tray. With kibbeh bil sanieh, instead of stuffing and deep frying the kibbeh individually, you layer the ingredients together in a sheet pan, bake it, slice it, and serve it. The same idea applies here: you sandwich a layer of flavorful ground beef between two potato layers, top it with some breadcrumbs that have been tossed in olive oil, and bake it until it’s golden brown and delicious.

I’m not going to try to convince you that this tastes exactly the same as classic potato chop, but it certainly captures its spirit, and takes way less time to prepare. You can totally prep this on a weeknight—it takes about one and a half hours from start to finish, but only takes thirty minutes of active time. And best of all, there’s no deep frying required, which means no deep frying clean-up. Potato chop skillet works great as a main or side, and it’s best served next to a big pile of greens dressed in lemon vinaigrette. 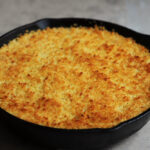 For the potato crust:

For the ground beef filling:

* If you don’t have a baharat blend on hand and don’t feel like making one, feel free to use 1 1/2 teaspoons paprika, 1 teaspoon black pepper, 1 teaspoon cumin, 1 teaspoon coriander, and a pinch of cinnamon.

** If you don’t have a convection oven, no worries, it might just take a little longer to bake, you might need to increase the temperature slightly, and you might need to rotate it to make sure it’s cooking evenly.

*** If you don’t have a cast iron skillet, feel free to use a similarly sized oven-proof skillet or cake round.