Assyrian cuisine tends to be really open-minded about whether certain ingredients are inherently sweet or savory. On the other hand, in the US where I grew up, yogurt (for instance) is almost always considered a sweet food. While it’s sometimes used as an ingredient in savory dishes, you’d never find a cup of yogurt with olive oil and za’atar in the dairy aisle of the supermarket. But savory yogurt is totally a thing in Assyrian cuisine, and Middle Eastern cuisine more generally. And furthermore, enjoying a bowl of yogurt with oregano and garlic isn’t thought of as a sweet and savory twist. It’s just plain old savory, since yogurt is such a neutral.

The same goes for porridge. Apple cinnamon or maple brown sugar will never disappoint, but my family’s favorite way to eat porridge is with a generous splash of salted butter. One of my aunts sprinkles her rice porridge with lots of coriander seeds, and a few other family members even dust theirs with Turkish coffee. I’d take these savory rice porridges over sweet any day (except maybe the Turkish coffee one which is just a little too efficient for my taste).

But on the other hand, when my family eats oatmeal, we usually have it American-style, on the sweet side, most often with a few drops of maple syrup, which we would always bring back from visits to our Vermont family. While I enjoy sweet oatmeal, and even have a delicious sweet oatmeal post coming up soon, I recently cooked savory oatmeal for the first time. While I suppose there might come a day when I’ll eat sweet oatmeal voluntarily, there’s currently no end in sight to my savory oatmeal breakfasts. It’s like treating yourself to a decadent oatmeal risotto for breakfast every morning.

For this post, I’ve written up recipes for my two favorite savory oatmeal bowls. The first one (above) is inspired by breakfast at my grandmother’s house. When we would sleep over at her house when we were little, and now whenever we visit her in Phoenix, she always cooks fried eggs, crispy bacon, and oatmeal for breakfast. And, while I never tried combining everything in one bowl before, it turns out these things all taste really phenomenal together.

The second recipe (below) is inspired by my family’s favorite way of eating rice porridge, with lots and lots of melted butter on top. But it’s also inspired by my favorite add-on to Japanese ramen: buttered corn. The two go together so beautifully, and they are just as magical on top of a perfect bowl of oatmeal. 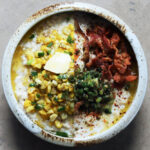 Bring everything to a simmer over medium heat, stirring every minute or so. Once it comes to a simmer, reduce the heat to low and continue to cook for about 10 to 15 minutes, stirring occasionally, until the liquid thickens and the oatmeal softens and cooks through. Everyone prefers a different doneness, so taste it while you cook, and stop cooking once it’s done to your liking.

* If you’re cooking for someone who can’t eat gluten, make sure you use gluten free oats.