My mom taught me to cook lentils and rice with lots of rinsing and careful par-cooking, so that everything ends up perfectly al dente, rather than mushing together into a lumpy porridge. Not that I have anything against porridges. It’s just that when it comes to mujadara (and rice more generally), I prefer separate grains.

My mom usually makes her perfect lentils and rice as an easy weeknight meal. But sometimes you want to make something vegan that’s a little more celebratory and special-occasion-worthy. And that’s where this mujadara with plenty of caramelized onions comes in.

why I love this mujadara recipe

This recipe is totally over the top. There are so many caramelized onions, they peek out over the top of the pot like an iceberg. And that’s a very good thing, because the onions are the best part. You slowly caramelize them until they’re the color of salted caramel ice cream, and then you fry a bunch of them until they’re deeply golden brown. These little extra steps set this dish apart as company food. If your guests are experienced home cooks, they will immediately understand the love that went into it. But even if they are clueless, they will enjoy it so much that the message won’t be lost on them.

Writing about caramelized onions has become a bit of a fraught issue for recipe-developers after onion-gate 2012. To sum it up real quick, Tom Scocca claims that recipe writers have been deceiving us about the amount of time it takes to caramelize onions (perhaps yielding to editorial pressures to fit the 30-minute-meal format). They all seem to claim it takes 5 to 10 minutes, when we all know it takes a lot longer.

He started a conversation that has made many of us think more critically about the ways we describe onion caramelization. I loved Sarah Jampel‘s response in particular. She says that the problem has more to do with “our lack of specificity in regards to just how those onions should look, taste, and behave. What does caramelized mean?”

So I’ll just say that in this recipe, the onions shouldn’t just take on a little bit of brown color. They need to become totally soft and golden brown all the way through (see photos). Then some of them will get fried and turn even darker brown and crispy-chewy. I first learned this trick from Maureen Abood’s wonderful recipe, and then went way overboard with my own (but, like, overboard in a good way). However much you use, it’s nice to have a little bit of exciting crunch in such a comforting dish. 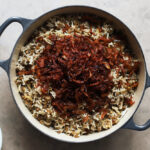 To caramelize the onions:

For the lentils and rice:

To fry the caramelized onions:

* At any point while you’re cooking the onions, if they look like they’re browning too quickly, reduce the heat a little. At any point, if there is a lot of fond that’s developing on the bottom of the pot, and you can’t easily scrape it up, simply deglaze with about 2 tablespoons of water, scraping up the bits. If either of these things happen, your onions might be a little on the dark side, but as long as you don’t let them burn, they’ll taste delicious.