Figs typically have two seasons—one toward the beginning of summer, when you’re composing that long list of all the things you want to do, and one at the end of summer, when you’re staring at your list, whose original items have not been crossed off, and which now has five new items (although you have accomplished two of them! But you added those two after the fact, just so you’d have something to cross off).

So while my first fig galette post of the summer was redolent of potential and excitement, this particular lamb galette doesn’t have its head in the clouds—it means business… but in a fun way! It’s the kind of galette for getting stuff done, but it’s not so practical that we’re in winter weeknight dinner territory quite yet. This one is made for a nice outdoor dinner with friends, maybe a picnic or just a meal on the porch. So once they show up again in the markets, grab all the figs you can while you can, and make this summer count.

Just a few notes about caramelizing onions before I get to the recipe:

Feel free to caramelize the onions however you’d like. I’ve written out the method I’ve been using lately, but your favorite onion caramelizing method will work fine. Just remember that onion caramelization takes time. You don’t want to simply “blonde” the onions—instead, you want them to be jammy and deep brown all the way through. This can only happen by going somewhat slowly. The photos above give you a sense of what to look for as they cook. You might be tempted to stop once they look like the second photo, but this galette is delicious with more intensely caramelized onions.

But even more important than that wonderful caramelized taste, if you don’t let the onions get dark enough, not only will the flavor be off, but the galette might get soggy, and it will probably look kind of awkwardly bulky. Onions give off a ton of water as they caramelize, which means that you’ll end up with about 3/4 cup once all is said and done. If you don’t let them caramelize long enough, they’ll make up way too much of the galette, and they might give off some water as they bake. 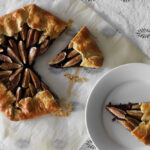 For the caramelized onions:

For the all-butter crust:

To assemble the galette: