While you can buy canned and dried fava beans year-round, fresh fava beans are just in season for a few months every spring. And, if you haven’t already guessed, they’re finally here! I’ve been buying piles and piles from my neighborhood produce market all week, and I’ve learned a lot about the best way to prepare, cook, and enjoy these delicious beans, which (I’ll admit!) have a bit of a persnickety reputation. But it doesn’t have to be that way. When you know how to deal with them, fresh fava beans are surprisingly low maintenance.

1) they don’t have to be pretty on the outside

A while ago, my friend Abeer was telling me about a conversation at the Food on the Edge conference about the growing demand for picture-perfect ingredients, even though certain marks that look like signs of decay can be either neutral or good indicators of freshness. For instance, persimmons are best when they’re just starting to get a couple little spots (sort of like a ripe banana). And that chalky white “bloom” that develops on the outside of neglected chocolate bars will just disappear once you melt and temper it. But with impeccably styled smoothie bowls and #fridgegoals posts flooding instagram, it doesn’t surprise me that home cooks are beginning to expect their produce to look like it should be in a magazine.

But here’s the thing about real life fava beans: their shells are often kind of bumped and bruised. I don’t know where food photographers are getting their fresh fava beans, but I’ve never seen ones in the wild that look like they do in magazines and food blogs. The fava beans in this post look like they’ve been through a lot. They’re blemished and tattered, and they seem like they may have been sitting around for a couple weeks after harvesting. Maybe they’re not from around here, or maybe (as I’ve always suspected… *single tear sad emoji*), they’re not really flying off the shelf.

But the nice thing about fresh fava beans is that their outer shells don’t matter, because they’re just going to get shucked and tossed aside, and the beans themselves are incredibly hardy. In my experience, spots and scratches don’t necessarily indicate that the beans have gone bad. If you’re unsure, you can always ask to pop one open to see if the beans inside look good (a few light brown spots on the inner membrane around the bean are fine). Just remember that looks can be deceiving.

2) shelling them is easy (if you use my method)

Since I’ve been experimenting with fava beans all week, I’ve tried to figure out the best way to shuck them (out of sheer necessity!), and I’ve figured out a way that works much faster than the most popular method.

In the past, I’ve normally done what just about everyone suggests doing: the string-removal method. You’re supposed to break off the stem end, and pull the string down the side, then do the same with the other side (like a string bean), and the pod is supposed to magically pop open, revealing the beans. But this has never really worked for me—the strings never seem to cut deep enough, and the pod always stays intact, so I end up ripping them apart and awkwardly picking bits of shell away to pry out the beans. Not great.

But when I started experimenting, I realized that there’s a faster, easier way that works in one swift motion. For more specific instructions, check out the recipe and images below, but here’s the gist of it: You hold the hollow part of the stem flat between your thumb and the side of your index finger, and you pop it back and split the whole thing open. Once you get the hang of it, it just takes between 3 and 6 seconds per bean, and (more importantly), it’s way more fun and less frustrating. You’ll zoom through them in no time!

When it comes to peeling the membranes after they’re blanched and out of their shells, I’m sticking with the usual tried-and-true method. You just peel a bit of the film back with a paring knife, and then pop the bean out (see the second GIF). Fava beans are humungous, so this requires way less work than the likeminded (and wildly popular) “smoothest hummus ever” chickpea peeling strategy (which, for the record, you will only convince me to do if I’m having the queen over for meze).

Even though I’ve shared my really easy method for shelling fava beans, they still require a little more prep time than the average veggie. But lucky for us, fava beans don’t take a lot of work or additional ingredients to taste delicious. However… here’s my hot take on cooking fava beans: contrary to what die-hard fava fans say, I don’t think they are at their best right after blanching in hot water. While they certainly don’t need to be fussed with, I do think they need just a couple more minutes of extra effort to really shine. In the recipe below, you simply sizzle them in a generous amount of butter for a few minutes, and then add a little garlic, sesame, and lemon juice. It’s the next simplest thing to eating them straight from the stockpot, but it makes all the difference, and makes all that shelling and peeling worth it.

Allergy warning: Most people will absolutely love fava beans and can eat them safely, but some people have a genetic enzyme deficiency, which can make it dangerous to eat favas. Read a little about favism to make an informed decision about whether to try them, and be sure to inform your guests too. If you’re looking for a good substitute for this recipe, try cooking about 2 cups of lima beans or soy beans this way (just make sure to use fresh or frozen green ones, not packaged dried ones). 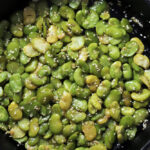 * If you don’t want all that butter to end up in the final dish: after letting the garlic sizzle for a few minutes, you can carefully pour off the remaining butter, or use a paper towel to sop some of it up. You must do this while the beans are still sizzling in the butter, and before you add the sesame seeds and lemon juice. Doing it this way, you can get rid of 1 to 2 tablespoons of butter. (If you’re wondering, I like to leave all 4 tablespoons.)