Caraway seeds show up in so many delicious Middle Eastern foods (not to mention North African, European, and Indian cuisines, which are no stranger to this ingredient). For instance, there’s Lebanese spiced rice pudding, there’s May Bsisu’s Palestinian variety of za’atar with caraway seeds, and there are dozens of spice blends, which wouldn’t be the same without it. But if you’re not very familiar with a caraway-heavy cuisine, you might have only experienced it in the form of seeded rye. And that’s not a bad place to start, because seeded rye is magical. I particularly love it grilled with slices of havarti, or toasted and slathered with nutella.

But because of the ubiquity of seeded rye, and the relative scarcity of caraway in other dishes, I think many people associate caraway exclusively with rye bread, sometimes even thinking of the two flavors as synonymous. But the indelible taste of seeded rye comes almost entirely from this spice, while the rye flour flavor subtly fades into the background. Sometimes when an ingredient has become so strongly associated with one particular context, it can be hard to separate the two, and it can be rewarding to experience familiar flavors in unexpected contexts.

Last spring, you may have read my post about an Assyrian dish that boldly features the flavor of caraway. When I was visiting my grandmother in Arizona, we recreated a cheese her family made in rural Syria. In Assyrian, we call it “gubta mtumarta,” which means buried cheese. This tradition of preserving cheese in clay pots underground is practiced by a few different Middle Eastern and Mediterranean cultures, but everyone makes theirs a little differently. My family, and many other Assyrian families, tend to preserve their cheese along with caraway seeds, which is what gave me the idea for a caraway mac and cheese bake.

I originally wanted to use Middle Eastern cheeses for this recipe, but they’re harder to track down in the US, and so to make grocery shopping a little easier (but still as similar to gubta mtumarta as possible), I’ve chosen three Mediterranean cheeses, which can be found in most upscale supermarkets: minouri, fontina, and parmesan. And yet, minouri and fontina are sometimes a little hard to track down, so I’ve tried the recipe with a few even easier-to-find, less expensive substitutes, which leads to a slightly different, but (unsurprisingly!) equally delicious mac and cheese.

This recipe gets its flavor both from caraway seeds and seeded rye bread. So if you’re not so sure about experiencing caraway in a different context, everything is tucked under a security blanket of teeny tiny seeded rye croutons. This mac and cheese (like any mac and cheese!) goes great with barbecue or anything grilled, and it’s particularly refreshing alongside a lovely summer salad. 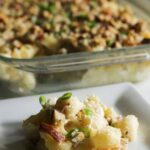 * Caraway is usually easy to find in the spice section of the supermarket (but it’s not flying off the shelves, so check the expiration date). I usually use 1 1/2 teaspoons of caraway, but some people prefer a stronger flavor, so adjust the seasoning to your preference. The amount you’ll add also depends on the flavor of your rye bread. Some rye breads are made with just a few caraway seeds sprinkled on top, while some have a ton of caraway flavor. I once made this with a very subtly flavored seeded rye, and had to use 2 full teaspoons of seeds. Use your own judgment, based on your own preference and your ingredients.