Za’atar chicken is so simple, you probably don’t even really need a recipe to make it. But recipe or not, it should absolutely be in your repertoire. And while there are a million great recipes for it already out there, I think this particular method is really something else, and you should absolutely give it a try (especially if you’re za’atar obsessed, and can’t ever seem to get enough of it).

I like to make my za’atar chicken with the same slurry of za’atar and olive oil you spread on manakish. So rather than just a sprinkling for flavor, you end up with a thick za’atar crust, which sizzles away while the chicken cooks to perfection. You’ve just got to be sure to pack it on in a thick layer, rather than brushing it on. Don’t let any of it go to waste, and make sure every last bit sticks on there. As it cooks, the juices and some of the olive oil will run to the side, which you can later spoon over a simple salad to serve alongside your chicken.

I’ve also included instructions for a really simple dry-brine here, so that even if you overcook the chicken by a bit, it’ll stay nice and juicy. Don’t skip it, and really be sure to allow 20 minutes for them to sit before coating in za’atar and roasting. You’ll be glad you did! 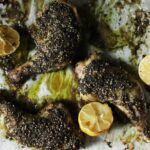 * If you prefer white meat, feel free to use chicken cutlets (whole breasts are more likely to dry out than cutlets). They will probably take less time to roast, so keep an eye on them (and don’t expect them to get as golden brown and crispy as legs, but do expect them to be delicious!).