For several days in a row, before one of many recent typhoons, it was unrelentingly 99° F with 100% humidity and constant rain, which you’d think would cool everything down, but just seemed to make things steamier.

So recently, when I was looking through my list of post ideas, I thought it would be nice to do a post about my grandmother’s shirw’it kirtopie, which is a stew of potatoes, peas, beef, and tomatoes, with lots of yellow curry powder (it literally means “potato stew” in Assyrian). But the idea of cooking shirw’it kirtopie in 99° heat was more like one of those fleeting impulsive aspirations that you laugh at as soon as the thought crosses your mind, like “I think maybe I should start eating flax seeds and yogurt every morning. HAH!”

Instead, I thought I’d turn it into a sheet pan dinner, inspired by a few of my favorite weeknight meals (e.g., Deb Perelman’s sheet pan chicken tikka, and Chungah Rhee’s Sheet Pan Clam Bake). The oven doesn’t need to stay on very long, and the whole thing bakes up in minutes. It’s crispy, delicious, and has all the flavor of shirw’it kirtopie, without being stick-to-your-ribs-ey.

But this recipe might strike you as a little odd for a couple reasons. The first thing that might surprise you is the amount of meat called for, which is just a measly half pound for a dinner for four (just two ounces per person). Most Mediterranean and Middle Eastern diets aren’t strictly vegetarian—although there are definitely plenty of phenomenal vegan and vegetarian Middle Eastern cooks, and most of my favorite Middle Eastern dishes do happen to be vegetarian.

But if your main exposure to Middle Eastern food is through kebab house menus, the relatively small amount of meat on my recipes page (and in this recipe itself) might surprise you. But in fact, most of the food I cook is vegetable-heavy, with just a little bit of meat, and I love eating less meat because it’s the way I grew up, but it’s also better for ethical eating, for the environment, and for frugality. And in the case of shirw’it kirtopie, meat is not present in overwhelming amounts.

And perhaps even more surprising, in this recipe I ask you to cook the steak all the way through. I always go back and forth about doneness whenever I’m writing a recipe that includes beef, because most of the foodies I know believe dogmatically in the virtues of medium-rare steak (and I do sometimes write recipes catering to this), but a lot of the world doesn’t share this preference.

It’s not that Middle Eastern people don’t eat rare meat, or that there’s anything wrong with raw meat in general. In fact, there’s a delicious Middle Eastern dish called kibbeh nayeh, which is 100% raw meat, mixed with bulgur, spices, and a couple other fresh ingredients, and I’m sure there are some Middle Eastern culinary traditions I’m unfamiliar with that cook beef to medium-rare. But, at least in my family (whose roots are in Iraq, Syria, and Lebanon), when we cook our meat, we cook it all the way through.

And so I’m pretty confident that the preference for medium-rare, like most preferences, isn’t objectively better than well-done. It’s just that when you cook your meat well-done, you need to do a few other things to it to make sure it doesn’t dry out. In this case, the meat is loaded with plenty of spices, salt, and olive oil, which keeps it plenty delicious. 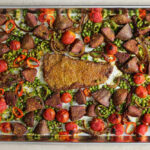