It seems like just about every time I read up on the history of a Middle Eastern fruit or veggie, it turns out to have originated in China. So it’s no surprise that most of the fruits and veggies that I need for cooking and blogging about Assyrian food are much easier (and cheaper!) to find here in Hong Kong than they are in the US. In fact, there are certain things that my grandparents grew up eating, which I never even tasted until this year—like mulberries! I can’t get enough mulberries.

But while it’s hard to go to a wet market and miss the giant mountains of koosa (for instance), some Middle Eastern ingredients require a little more digging. Like, I still haven’t been able to find parsley in tabbouleh-level quantities for a reasonable price—each teeny tiny little pouch in the British supermarket is $3US, and it’s finally almost no longer emotionally painful to shell out that much for something I’m used to buying by the bundle for $1. And while most pantry items are somewhere out there, they’re not available everywhere, and almost always outrageously priced, and usually not the exact brand or variety I prefer. So whenever I come back from the US, I make a trip to my favorite Middle Eastern market, and then pack my suitcase full of tahini, pomegranate molasses, extra-fine bulgur, and all the other things I’d miss.

Most people I know here with ties to elsewhere are similarly obsessed with tracking down their favorite ingredients, which brings me to this post. My friend Mina ordered these amazing corn tortillas from LA and was kind enough to share them, so I immediately stashed them away in the freezer before enjoying them, because I knew I was going to have to come up with something delicious to really appreciate this little miracle. Then, a few weeks later, when I suddenly had a craving for something I’ve never had before, I immediately sprinted the four paces from the sofa to our shoebox-sized freezer (but like, knee high boot shoebox-sized), threw the tortillas in the fridge, and anxiously awaited these mujadara-style tacos.

Mujadara is a Middle Eastern lentils and rice dish, but it’s really more like lentils and rice and caramelized onions. Thinly sliced onions quietly sizzle and sweat until they finally turn golden-brown, and not just a little charred on the outside, but deeply browned all the way through to their centers. Some cooks even fry a few of of the onions until they get nice and crispy (an opportunity for extra flavor and texture I’d never pass up). The caramelized onions bring so much texture and flavor to the lentils and rice. And, it turns out, they’re very delicious in taco form.

I looked around and found even more mujadara inspiration for you guys. I’m definitely not the first to figure out that these two are a match made in heaven, and there’s so much good mujadara/taco-related content
out there. Hope you enjoy! 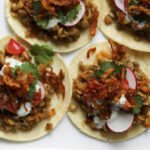 For the caramelized onions:
1 1/2 pounds sliced onions (from about 2 large or 3 medium onions)
2 1/2 tablespoons olive oil
3/4 teaspoon salt (or to taste)

For the fried onions:
1 cup olive oil (plain, not extra virgin; or use another neutral-flavored oil)
2/3 of the caramelized onions (above)

For the lentils:
8 ounces brown or green lentils (from half a 1-pound bag)
Salted water for simmering
1 1/2 tablespoons olive oil
2 1/2 teaspoons baharat *
The other 1/3 of the caramelized onions (the ones you didn’t fry)
More salt to taste