A few years after my mom and her family immigrated to Chicago from Baghdad, when my mom was a little girl, they moved to a bigger apartment in Andersonville on Balmoral Avenue. But even though there was more space than they had before, there were still twelve people packed into the two flat. Every week, Baba would take my mom to the produce market on Randolph, where he’d pass for a restaurant owner to get good deals on produce. They’d bring home giant cases of lettuce, tomatoes, greens, and other produce, and the whole family would divide things up for the week. One week, when they brought home too many tomatoes, my mom and uncle Al packed up the extra ones in paper bags and went door to door selling them to the neighbors. And on weeks when they would bring home too many cases of dandelion greens, swiss chard, spinach, or romaine, they would make a big batch of yarcah.

Yarcah is just the Assyrian word for greens, and while cooking times vary from one vegetable to another, the idea is always the same: take something green and leafy, blanch it in boiling water until it wilts, and add it to some sauteéd onions and lemon juice. It’s very simple and quick to make, and results in perfectly cooked greens, which aren’t bitter in the least. You can even freeze the finished yarcah in quart-sized ziplock bags to have veggie sides ready to go for weeknight meals. If you’re planning on freezing the greens, you should cook them for about 3 minutes less than you would otherwise, since they will soften further through freezing and reheating.

Dandelion greens are my favorite greens to cook this way, since they tend to get very bitter without blanching. This recipe ensures that they turn out perfectly. The greens have so much flavor and such a lovely texture, especially if you leave in the tender parts of the stems. But feel free to use whatever greens you’d like, using the following guidelines:

Tender greens: spinach, romaine, and other tender greens do not need to be blanched in hot water. Instead, throw them in once the onions are done cooking, toss them around until they wilt (about 2 to 3 minutes), and add the lemon juice. Tender greens cook down a lot more than hearty greens, so you should scale back the amount of lemon juice accordingly (add half, taste, and adjust)
Medium greens: swiss chard, broccoli rabe, and dandelion greens are somewhere more in the middle. Use the recipe below the photos as a guide.
Tough greens: collards and kale need longer to cook. Cook them until they are tender, about 8 to 10 minutes for kale, and at least 40 minutes for collards.

The most important thing is to taste a piece every so often as you cook, just like when you make pasta and forget to set a timer. 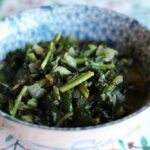 * I use the full 1/2 cup of lemon juice because I like more acidic greens, but if you want a mellower flavor, you can add closer to 1/3 cup. You can always add a little more, but it’s hard to take lemon juice away.

** The dandelion greens pictured here were cooked for 8 minutes, which yields a deeply green, slightly toothsome finished product. If you like brighter, even more al dente greens, cook them closer to 5 minutes (or even less). If you have very tender, small dandelion greens, you may need to cook them even less. If you’re using a different vegetable, see the chart above the lemon tree photos as a guide.