Just like your favorite red velvet cake, they’ve got the fluffy cream cheese frosting, that classic vanilla and lightly chocolatey flavor, and a lovely dark red color. But I’ve transformed their light and airy cake batter into chewy brownies and baked them in a square pan.

It’s the best of both worlds!

I have to admit, I tested this recipe a couple more times than I actually needed to, so I vote option 2!

If you’d like your frosting to be more set, feel free to increase the butter to 4 Tbsp [60 g] total. I like a light and fluffy cream cheese frosting with a texture more like sour cream frosting. This one is dollopable right out of the fridge (as you can see from the photos), but holds the shape of swooshes, kind of like cream whipped to medium-soft peaks. Adding extra fat will help it solidify more when it chills. Just make sure to let it warm up a bit if it’s not spreadable straight from the fridge.

These brownies keep super well in either the refrigerator or the freezer, and can even be enjoyed frozen. Cream cheese frosting is a perishable dairy product, and should be treated like whipped cream—so the brownies should really be kept chilled for food safety reasons.

Ok so now I’m about to get a little nerdy about dessert mashups, so feel free to skip to the recipe if you’re not into the intersection of desserts and venn diagrams.

Whenever I make a dessert mashup, I try to make sure the final product represents both desserts pretty equally. And then I draw a venn diagram because I’m a dork. If one side isn’t fully represented in the center, it means I need to do a little tweaking. And if an essential feature of one dessert is left out, it means it’s probably not the best idea.

Here, you can see that the frosted brownies side is doing just fine. Cocoa buttercream swaps out for cream cheese frosting. And they’ve still got their chewy/fudgy texture.

But at first glance, they’re going to be a little lacking in chocolate flavor, compared to a traditional brownie. So to make sure they still taste like actual brownies, I increased the amount of cocoa so that it’s somewhere between the amount in a red velvet cake and a standard brownie. So now they’re a bit more chocolatey than a red velvet cake, but less chocolatey than a regular brownie.

The red velvet cake side is doing great too. Since I didn’t add too-too much cocoa powder, their red color still pops. They’ve also got that classic red velvet vanilla/light chocolate flavor, and they’re frosted with cream cheese frosting. Leaving either of those features out would be an absolute deal-breaker for me.

One thing missing is a layer cake arrangement and light/fluffy texture, since those features aren’t compatible with a brownie. But because we kept all their other important features, they still very much feel like red velvet brownies.

One other potential problem is the lack of buttermilk. Brownie batter has no room for extra liquid, but you’ll find buttermilk in most red velvet cake recipes. It’s not an absolutely essential ingredient, so we could get away with just forgetting about it. But just to add a little extra tanginess, I added a little bit of vinegar to the batter. We’re also using a tiny bit of baking powder, which doesn’t need vinegar to activate (unlike baking soda). So we’re just using the vinegar for its acidity, not its leavening power. 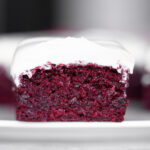 * I developed this recipe with liquid food coloring because it’s easily accessible for most folks who read this blog. But if you have gel coloring, you can totally use it here instead. You’ll just need to use much less. Add it gradually to your wet ingredients until they’re deeply red.

Also note that natural food colorings will not dye your cake as dramatically as artificial colorings. This won’t affect the flavor, so feel free to use a natural food coloring, but adjust your expectations accordingly. And don’t use a bunch of extra liquid coloring to compensate, or it will throw off the amount of moisture in the recipe.

** If you let it chill for too long, it’ll stick to the pan a bit when you try to remove it. If so, just let it sit at room temperature for a few minutes until it’s easier to remove from the pan, and re-trace around the edges.