My oven is about the size of a large shoebox. So you can bet that I, like you, do not own a spit or anything remotely like it. But regardless, I’m always trying to recreate shawarma at home. And luckily, there are a bunch of good ways to approximate pork shawarma without a spit. I’ve discovered a simple technique that works remarkably well (and doesn’t require any special equipment!):

My technique is simple: thin-slice, marinate, layer, slow-roast, and sear. It’s partly inspired by Serious Eats’ Tacos Árabes technique, but with one really important difference: Instead of cooking it in a loaf pan, I roast it in a wide skillet.

Here’s a video demonstrating how I use this technique to make super crispy, delicious tacos arabes:

Why this technique works:

Roasting in a wide skillet allows the juices to run off and concentrate, and the outside roasts beautifully. Because it’s got so much exposed surface area, the outside bits end up tasting exactly like real crispy pork shawarma, and the inside ends up getting all seared and delicious eventually.

In order to roast it in an open pan without the whole thing toppling over and falling apart, you’ve got to layer the slices in particular way, which actually approximates spit-layering. Instead of just stacking them straight up, you create an overlapping rough pentagon, and continue layering this way. It has a lot of structural integrity, which means you don’t actually need a skewer going through the center (or the sides of a loaf pan) to hold it together. 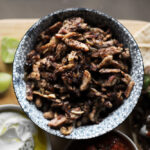 for a halal version, try my chicken shawarma

for the pork shawarma:

* You can make ahead to this point, and let it marinade up to overnight, or you can bake it right away (it makes little difference).

** You can even make the whole dish ahead up to this point. Cook and slice the shawarma the day before you plan to serve, reserve the juices, and then sear at the last minute. The fat will solidify in the fridge overnight, and the juices will gel, but you can use it just like butter the next day (throw it in the pan and let it melt).