If you ask me, early fall is the best time for corn chowder. It’s just starting to cool down enough that a warm bowl of soup doesn’t sound like absolute torture, and summer veggies are still super fresh and in season. While you can absolutely make this soup in the cooler months ahead with frozen corn, it’s a little extra delicious this time of year because fresh ears make a huge difference if you know how to get every bit of flavor out of them.

One of the greatest (but also weirdest-sounding) tricks for getting the most out of an ear of corn is “milking the cob.” After you slice all of the kernels off, you use the side of your knife to scrape every last bit into the pot. At the end of the day, there’s nothing special about this stuff—it’s just a little extra corn. But it blends right in with the broth to give the soup a deeper corn flavor. You could always purée a quarter cup or so for a similar effect if you’re using frozen kernels instead (not that I’d ever ask you to go to the trouble—that sounds like a pain). But there’s something extra nice about eking out every last bit of an ingredient.

Oh and while we’re on the subject of cutting corn off the cob, don’t miss the video by the recipe below, which demonstrates the absolute easiest way to cut corn off the cob without making a big mess (no bunt pan or any special equipment required).

This particular corn chowder is special for a couple reasons: first, it’s drizzled with a little bit of sumac oil. Sumac goes perfectly with corn (try my corn and sumac salad if you have any doubt), and gives it that extra little bit of brightness. Also, I love to substitute sweet potatoes in place of regular potatoes in just about any corn chowder I make, including this one. I used to make another variation on this recipe all the time when I was in grad school: just drizzle on some sriracha instead of sumac oil, and sprinkle a little shredded sharp cheddar on top before serving. Either way, so good! 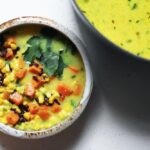 for the sumac oil and toppings:

Making it ahead: The soup keeps really well in the refrigerator for a few days, and stores beautifully in the freezer for 3 months (the sweet potatoes will soften and dissolve a bit, but they add good body and flavor to the broth). Make the sumac oil just before serving.