(Jump to the kubba hamuth recipe.)

I recently had a great conversation with my friend Tony about community-centered cooking. He’s preparing for an exciting upcoming project on Syrian food and community traditions. And we talked about a dolma project I’m working on. The two subjects aren’t entirely unrelated, or as Tony put it:

“If you’re sitting down rolling dolmas with your neighbors and family, you’re bound to connect and share very intimate details, because you have all the time in the world. And that’s so beautiful.”

We covered so much ground, and whenever the topic would shift, Tony would preface it by saying, “So, I don’t know if you want to fall down this rabbit hole, but…”

And here’s the thing about me: I love falling down rabbit holes. I’m currently falling down a dolma rabbit hole right now. But I think the next one I want to fall down is kubba. Because from where I stand, I have a lot to learn.

I mean, growing up Middle Eastern American, I know a bit about kibbeh/kubba. In case you’re not already familiar, kubba is a meat and grain dumpling. There are a ton of different varieties. Some are named after the towns they’re from, and others after the style in which they’re made. While most are dumplings, some kibbeh are baked in a tray or eaten tartare/sashimi style.

My family is Assyrian from Iraq and Syria, and we have our family specialties. My Syrian family makes kbeibat and kibbeh bil sanieh. And my Iraqi family makes kubba Halab and sometimes also kubba hamuth. But I haven’t experienced all that much outside of these.

what should this recipe be called, anyway?

So when I sat down to do a little research for this blog post, I realized that what I’ve been calling kubba hamuth is actually very different than most recipes out there. Most of them (e.g., Philip Juma’s and MidEast Chef’s) use rice or rice flour instead of wheat or bulgur. The only other recipe I found that uses bulgur is Julian’s from Assyrian Dishes. She also adds greens, in her case swiss chard, which I highly recommend trying. I spoke with Hilda Sterner, whose kubba are made with rice, and she said that she would personally call my stew kubba pirdah, but that she also knows of a version that is made partly with cream of wheat.

Kubba hamuth basically means “sour kubba,” referring to the lemony tomato stew it’s simmered in. So the most crucial thing is that it’s tangy. And while I’m tempted to spend all week obsessively researching it, I’m going to have to wait a while to fall down this particular rabbit hole. I’m looking forward to learning more about the nuances and regional variations of all the different kinds, whether fried, boiled, stewed, or baked in a pan.

But for now, while I’m busy tilting at other windmills, I’ll just leave you guys with my recipe for kubba hamuth (…or something!). This is definitely the kind of recipe that’s fun to cook as a family. So I hope you enjoy it in good company. 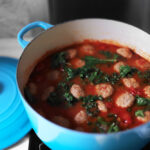 for the kubba shell:

for the kubba filling:

* You can make the filling with a fattier ground beef, but I developed the recipe this way so that you won’t have to buy 2 different kinds. But if you have 1 pound lean meat and 1 pound higher fat meat, feel free to skip the butter.

** This recipe has the right ratio of filling to shell, but no worries if you have some leftover at the end. Simply make a few small meatballs with the leftover filling (or the leftover shell), and throw them right in with everything else.

*** Letting the greens coast will help it stay green instead of turning gray, but if you’re making this ahead for guests, you might want to add the greens at the last second, because it will continue to cook as it cools down. Everything else can be made ahead of time, reheated later, and the greens added at the last minute. If you’re just making this for yourself and your family, it keeps great as is, and the leftovers will be delicious. Kale in particular isn’t traditional here, but it’s fairly traditional to add some greens or other veggies to the stew, and kale is just what I had handy when recipe developing, so feel free to add your favorite veggie instead.