My father-in-law makes a fabulous German apple pancake. And in the fourteen years I’ve known my husband, I’ve enjoyed it more times than I can even remember. If you’ve never had one before, it’s basically a big, puffy, caramelized pancake for sharing. It’s a lot like a Dutch baby, but the apples keep it from puffing up. So a German apple pancake has a more custardy texture. And while it’s often flavored with cinnamon, lately I’ve been adding a little saffron too. This might come as a surprise if you’re most used to seeing saffron in paella and the like. But it makes total sense if you’re familiar with many Middle Eastern, North African, and South Asian desserts.

a note on using saffron in this German apple pancake

Saffron works wonderfully with apples and cinnamon, but it’s important to make sure the flavors are subtle and balanced. A little adds a lovely aroma, but too much can taste medicinal and metallic. After a bit of tinkering with my recipe, I settled on thirty-five threads as the magic number. But it might vary a little depending on the quality and age of your saffron, so feel free to adjust it to your liking. Just make sure you don’t add more cinnamon, which would overpower the saffron’s delicate flavor.

If you don’t have saffron at home, feel free to leave it out of the recipe entirely—it’ll still be a wonderful cinnamon German apple pancake without it. 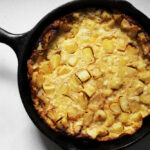