I’ve been tinkering a bit with my lahm bi ajeen/sfiha recipe from the last year or two. And I’ve finally decided that I prefer making them with the corners pinched, a style I picked up from some of my Lebanese friends. My cousin Kris originally taught me to make them the flat way, which works wonderfully if you have a pizza stone and an extremely hot oven—indeed, making them that way results in a chewy-crisp crust similar to the best pizza Napoletana.

But after two international moves in three years, it’s been a while since I’ve owned a pizza stone. Luckily, baking them with pinched corners at a lower temperature works great when you don’t have a pizza stone. Otherwise, without a stone, a thin, flat crust has a tendency to turn out either too crackery or too soft.

When it comes to the filling, I do one thing differently than most other lahm bi ajeen/sfiha recipes. The secret to a fail-proof recipe for sfiha? I add a tiny bit of bread crumb to the meat.

You don’t have to add breadcrumbs, and it’s not exactly traditional, but yields super consistent results. Before I started adding breadcrumbs, I occasionally struggled with the meat shrinking up into a little hockey puck in the center of the pie, and also had a couple batches turn out soggy from the excess liquid trapped by the pie’s sides. Breadcrumbs give excess moisture somewhere to go, and help prevent the meat from seizing up as the pies bake.

The following recipe only calls for two tablespoons of breadcrumbs. That’s just enough to help out with the moisture problem, without “watering down” the flavors and meat, so to speak. 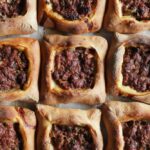 * Store-bought dough works wonderfully, or feel free to make a double batch of the dough recipe from this post.

Making ahead and storing: These keep wonderfully in the freezer, but they (like any bread) will stale much faster in the refrigerator. I like to reheat them by microwaving them for just a few seconds to get them started thawing, then throw them in the toaster oven for just a couple minutes to thaw all the way through and crisp up a little (keep an eye on them to make sure they don’t burn).