As you might notice if you browse my recipes, French bistro food isn’t really my style. It’s just not something I usually find inspiration in, and while I totally get the appeal, I just don’t personally crave it. But despite this ennui, even I can’t resist a bowl of French onion soup. What’s not to love about a cheesy croûte on top of caramelized onion soup?

Underneath all that cheesy bread, I think it might just be my one exception because the flavors remind me so much of mujadara, one of my favorites. Mujadara is simply lentils and rice with a ton of caramelized onions, sometimes served with yogurt and crispy fried onions on top. And as it happens, adding lentils to French onion soup turns it into much more of a vegetarian main, sprinkling on crispy fried onions is just the thing to send it over the top, and blending za’atar with fresh thyme strikes the perfect balance between the two dishes. I channeled my inner Julia Child for this one (though I’m still not sure if she’s in there), and I hope you enjoy it on one of these chilly winter evenings. Brr!

Before I leave you with the recipe, let me just tell you how excited I am that yesterday was my blog’s second anniversary! This time last year, I wrote a bit about how difficult it is for me to recover from a disastrous recipe developing day, and I’m proud to say that I’ve had a record low number of pity parties this year. If I’m being totally honest (and probably also if you ask my family), I haven’t actually gotten much better at taking recipe developing disasters in stride, but I’ve become better at avoiding them in the first place, and productively working through them when they happen.

In my first year of blogging, there were so many times that I’d make something, it wouldn’t go well, and I would have no idea how to fix it and move forward. I’d head to the kitchen the next day with a fuzzy idea of what to do differently, and things would go even worse. Or I would come up with a half-baked idea, not spend enough time fleshing it out before heading to the kitchen, and then (shockingly! hah) it wouldn’t pan out. Of course, these failed experiments never made it onto the blog, which meant that I had to work that much harder before stumbling into a recipe I was actually excited to share with you guys. I’m proud of everything that made it onto the blog in my first year, but sheesh—I did not get there in the most efficient (or mentally healthy) way possible.

But now, I feel so much more prepared whenever I start working on a new idea. And when things don’t go right, it’s become so much easier to figure out what went wrong and how to fix it. I’ve learned so much since starting, especially this last year, and I hope to keep challenging myself, learning, and growing this year. So I guess—resolution met! Kind of! Maybe I can work on the mindfulness side of the equation this time, and try to take on a more blissfully enlightened, easygoing, no-worries kitchen persona when things go wrong. Probably not, but I’ll check back in with an update next February.

Overall, it’s been a rewarding year! I wrote and posted seventy-six new recipes, I was nominated for a Saveur award in the best food culture blog category, I got involved with the Cook for Syria movement and contributed a recipe to the Bake for Syria book, and I’ve just recently started thinking about next steps and new projects. One project is way too early on to really talk about in detail, but I’ll just say that I’m having so much fun with the research stage, which has involved interviewing my Middle Eastern/North African chef/food blogger friends and spending all day thinking about, cooking, and researching one of my all-time favorite foods. Can’t wait to see what becomes of it. But in any case, I have a feeling this is going to be a good year, and I can’t wait to share some of my favorite new recipes with you here. 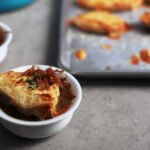 for the french onion lentil soup:

for the fried onions:

Notes on multitasking: While the onions finish caramelizing, start frying the ones you set aside. While the soup simmers, assemble the croûtes.

* If you want a method that requires less babysitting (but more time), try the method I use in my mujadara recipe