The last time I posted a recipe prominently featuring sumac was my za’atar-inspired (but definitely not za’atar-flavored) sumac thyme cake. That was way back in August, so I believe it’s high time for another sumac recipe, and so I’m back with another sweet one. But sumac thyme cakes aside, you might be most familiar with sumac as a savory ingredient. However, if it’s also your goal in life to eat as much sumac as humanly possible, you’ll be pleased to learn that it works as wonderfully with sweets as it does with, say, fattoush. Sumac has a very tangy, fruity flavor, and it’s delicious just about anywhere you’d include lemon or rhubarb.

Some of my favorite berry shortcake recipes feature a bit of lemon juice or a lot of rhubarb, and these tangy additions keep things from becoming too cloying. Sumac accomplishes the same thing, all the while tinting the syrup a deep wine-red hue, flecked with dark purple, and making things even fruitier and a teeny bit astringent (but like, astringent in a good way, like a cup of Earl Gray, a piece of dark chocolate, or a glass of malbec).

Many recipes for shortcakes have you cluster the biscuit rounds together so that they can rise higher in the oven, or have you bake a sheet of biscuits and then cut them into squares, but I personally love baking individual round biscuits, because you get way more crust that way. But baking them separately sacrifices height, so it’s important to compensate so that your biscuits end up nice and tall. Tall biscuits can easily (and prettily!) be cut in half, which is important for shortcakes, since they’re little mini sandwich cakes.

The key to picture-perfect round-stamped shortcakes is rolling the biscuit dough out thicker than you’d think, to about one and a quarter inch. If you roll the dough out to just a half inch, like some recipes specify, they won’t be tall enough. My biscuit cutter is only about an inch tall, so this means that the tops of the biscuits burst out over the cutters when stamped, but this gives them the extra height that they desperately need.

Before I leave you with the recipe, a quick note on whipping cream: I learned from my friend Erin from Cloudy Kitchen, whipping cream at a lower speed keeps it from beading. And since whipped cream changes from one stage to the next very quickly, I also like that this gives you more control over the final texture. Stiff peaks work well for piping, when you want it to be really crisp and well-defined, but medium and soft peaks work much better for dolloping. At high speed, this shift can happen in a matter of seconds, so medium speed gives you a better chance at catching it at the right moment (and at the very least, prevents you from over-whipping it into butter! Which has definitely happened to me a couple times before. Kind of a lemons-lemonade situation, but it still sucks when you’re trying to follow a recipe and only have so much whipped cream in the refrigerator). 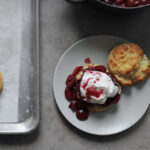 For the whipped cream:
1 cup heavy whipping cream (very cold)
1 to 2 tablespoons sugar, to taste
a pinch of salt

* If you don’t have convection, you may need to increase the temperature a bit and/or bake them slightly longer. Keep an eye on them, and take out of the oven once they’re golden brown.

** If you want to make this without having to remove the cherries from the syrup, you can just make a compote by cooking everything together uncovered, until the cherries break down and the syrup thickens, but if you want the cherries to stay whole, you’ll have to cook them more briefly, and you’ll end up with a thin liquid. Either will be delicious though! For an even simpler option, macerated cherries are also fabulous; simply combine the 4 ingredients, plus an extra teaspoon of sugar, and let it sit in the refrigerator for at least 30 minutes, until they’ve given up a lot of juices (no cooking necessary).

*** The cherries and whipped cream will keep in the fridge, but the biscuits will keep better at room temperature. If you’re serving them more than a few hours after baking, pop the biscuits in a 350°F oven for about 2 or 3 minutes, just until they’re warmed through.