I grew up in Chicago, so I consider myself a deep dish pizza expert. And as far as I’m concerned, Chicago deep dish pizza is all about the crust. Giordano’s has a super flaky biscuity crust. Pequod’s has extra-caramelized bits of frico around the edges. And Lou Malnati’s (my favorite!) has a buttery, deeply flavorful cornmeal crust.

Until recently, I was only an expert in eating deep dish pizza, but I tried recreating that iconic Lou Malnati crust, and I finally cracked the code. It took me a long time to get there, but last week I had a major revelation that I probably could’ve gleaned from a cheesy corporate motivational poster: Many paths lead to the same destination.

(Oh! And: adding beer makes most things taste even better.)

How I cracked the code:

What I tried first:

I watched every video of cooks making pizza at Lou’s. I read every interview with their owner. I read every article speculating about how they make their iconic cornmeal crust. Over the years, I tried one or two copy-cat recipes. I tried tinkering with my own recipe, closely following what I had learned. But nothing tasted like the Lou’s I knew.

Then I decided to go a completely different route:

I took everything I knew about the final product, and backwards engineered it, paying less attention to the way it’s supposed to be made.

My ingredients and method weren’t in line with the real deal, but the results were weirdly even more Lou-ish than recipes that stick closely to the original.

So, no—this is not exactly how Lou Malnati’s actually makes their pizza. But here are the main things you can do to end up with a crust (and pizza!) that’s uncannily similar: 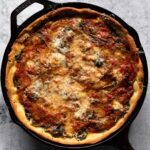 *** If you don’t have a cast iron skillet, use another similar sized ovenproof skillet or pan. Depending on your pan, pizza might get more or less crispy on the bottom, and it might take more or less time to cook.