My cousin Heather is getting married next week! I live on the other side of the world and can’t make it to the wedding, so this summer when I was visiting Chicago, I baked some s’mores baklava (/baklawa) and stashed a bunch in my parents’ freezer for the shower. Heather and her fiancé are super outdoorsy and go on so many amazing backpacking trips, and we grew up with our grandmother’s cardamom baklawa, so this felt like a total Heather dessert. Wishing H&C congratulations and a lifetime of beautiful views, good food, and love ❤️

Before I get to the recipe, a few notes on how I came up with it and why I love it. The thing is, sometimes when you combine features of two foods, you end up losing something along the way, but I didn’t want to settle for anything less than 100% s’mores and 100% baklava, so this recipe doesn’t shy away from the essential features of either. It’s soaked in a toasted marshmallow syrup, filled with crumbled pecans, graham crackers, milk chocolate, and more toasted marshmallow, and topped with all the s’mores things.

The s’mores of my childhood feature milk chocolate, toasted marshmallows, and honey graham crackers. I’ve never really been a fan of those fancy adaptations with 90% cocoa fleur-de-sel-flecked chocolate and homemade graham crackers. When it comes to s’mores flavors, I only have eyes for classic.

And it might not surprise you that I have a few dealbreakers when it comes to baklava as well. It absolutely must have crisp filo layers, which are soaked in a rich syrup—the syrup has to have just enough water to penetrate every single layer, but not so much that they become soggy. And the syrup must be there not only to sweeten things, but to hold everything together and give it a wonderfully sticky texture. If the syrup is just decorative, if it just sits on top and soaks into the outermost layer, or if it doesn’t have a structural purpose, it’s not really doing its job. And while we’re at it, it has got to have some sort of nut in the filling.

This recipe has the best of both worlds in every bite—those memories of the big plates of cardamom baklawa my grandmother always had on her kitchen counter, as well as the nostalgia of camping trips with my family. 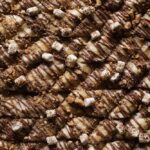 for the toasted marshmallows:

for the marshmallow syrup:

** If you don’t have convection, no worries—you might need to slightly increase the temperature and/or bake it for slightly longer. If your convection fan is particularly strong, you might want to bake without convection, otherwise the pieces of filo might go flying. I’ve only had this problem baking in commercial kitchens, and most home ovens won’t actually blow things around.

Previous Post: « knife skills: how to slice
Next Post: herbs: how to wash, dry, chop, and store them »