My grandmother lived in Beirut for several years as a kid, but she spent the later part of her childhood on her family’s farm in rural Syria. When she married my grandfather, she moved to Baghdad to be with him and his family, and found herself acclimating to city life again. She remembers immediately noticing some of the differences in the way people ate and lived. In their new life together, they dined with their friends at the masgouf restaurants along the Tigris river, they used refrigerators instead of preserving cheese in clay pots or grapes in crates of sawdust, and they often used sweetened condensed milk in their chai instead of farm fresh milk.

The concept of sweetened condensed milk tea will probably sound familiar to you, even if you’re not familiar with this as a mid-century Baghdad thing. Most well-known in the west is Thai iced tea, but this combination can be found the world over. For instance, here in Hong Kong, if you order a “milk tea” in any restaurant, you’ll get a cup of strong black tea mixed with sweetened condensed milk or evaporated milk.

These experiences and memories, as well as Adrianna Adarme’s milk and honey baklava and Chetna Makan’s masala chai baklava, inspired me to try incorporating both tea and sweetened condensed milk into my baklawa recipe—and I’m so glad, because milk tea baklawa is my new favorite.

While this recipe is super easy to bake (and a total delight), coming up with it was a little on the tricky side—the sweetened condensed milk made recipe developing a fun challenge. First, I had to find the best way to infuse condensed milk with tea. Just heating it up and dropping a tea bag in won’t work (there’s not enough water to allow the tea to fully steep), but you also don’t want to introduce too much liquid, otherwise your baklawa might end up soggy.

I found that first steeping the bags in a half cup of boiling water was just enough to give them a head start, before introducing the sweetened condensed milk and allowing everything to simmer for a few minutes. As you can see, the tea turns everything a beautiful caramel color, and (as you can imagine) it lends such a lovely flavor.

Plus, the half cup of water dilutes the syrup to just the right consistency (any thicker, and it would have trouble finding its way into the center of each piece; any thinner, and the baklawa would end up swimming in it). Since it’s such a small amount of water, it’s important not to let it boil off in the beginning. Follow the instructions in the recipe, and it’ll turn out great.

The second quirk in developing this recipe was the temperature of the syrup. Traditionally, cold syrup is poured over hot baklawa. But since sweetened condensed milk is more viscous than a simple syrup, it’s important that you pour it while both the baklawa and syrup are warm. But even though it’s counterintuitive, this is actually way easier—you don’t have to plan ahead, and you can make the syrup while the baklawa is in the oven.

Like all baklawa recipes, this one is ideal for a make-ahead dessert, but this particular recipe keeps better in the refrigerator/freezer than it does at room temperature. It has enough sugar that you can probably leave it out at room temperature for a while, but it should be stored in the refrigerator if you’re storing it longer than a couple hours. (Think of it like a cake with cream cheese frosting—some people are comfortable leaving it out overnight, while some people insist on refrigeration. Just remember that this contains a lot of dairy). It keeps for about 6 days in the refrigerator, or much longer in the freezer. 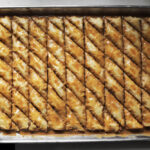 for the milk tea syrup:

* Clarified butter is really easy to make, and I’ve got a recipe and video here. This amount of clarified butter comes from about 8 ounces / 227 grams sweet cream butter (which is conveniently the amount in my clarified butter recipe).
** If you don’t have convection, no worries—you might need to slightly increase the temperature and/or bake it for slightly longer. If your convection fan is particularly strong, you might want to bake without convection, otherwise the pieces of filo might go flying. I’ve only had this problem baking in commercial kitchens, and most home ovens won’t actually blow things around.
*** The syrup will be much more pourable when warm, and it will more easily soak through the layers of filo. Usually, chilled or room temperature syrup is poured over baklawa, but this milk tea syrup works better when warm. Feel free to look at the above photos to get a sense of the consistency the syrup should be as it pours.

Note: If you have any leftover baklawa, you can freeze it and turn it into baklawa frozen yogurt.