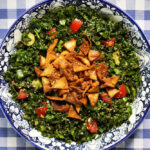 * Pomegranate molasses is available in Middle Eastern markets and some grocery stores in the ethnic foods aisle. You could also make your own. It keeps very well and is used in a lot of Middle Eastern recipes.

** Sumac is also available in Middle Eastern markets and some grocery stores, but it’s also very easy to find online. I use sumac in several of my recipes, and it’s a good thing to have in your pantry if you want to make a lot of Middle Eastern food. Learn more about it here.

*** If you don’t like touching food with your hands, you could instead mix the kale with 1 tablespoon olive oil in a gallon ziplock bag, press all the air out of the bag, and massage the bag for a couple minutes. But if you plan to store it in the fridge afterward, it’s important to let the air back in the bag.

Storage suggestions: If you are planning on keeping some of the salad as left overs or packing it to take to work, it’s best to mix up the dressing (lemon juice, pomegranate molasses, sumac, salt, and 2T olive oil) on the side. To pack up your salad, get out as many storage containers as will fit the salad. Massage the kale with 1T oil. Shake the dressing well and then divide it evenly between the container(s). Place the kale on top of the dressing, followed by the veggies, then the herbs, and then pack the pita chips in a sealed plastic bag on top of the greens. Once you’re ready to eat, you can toss everything together and enjoy.